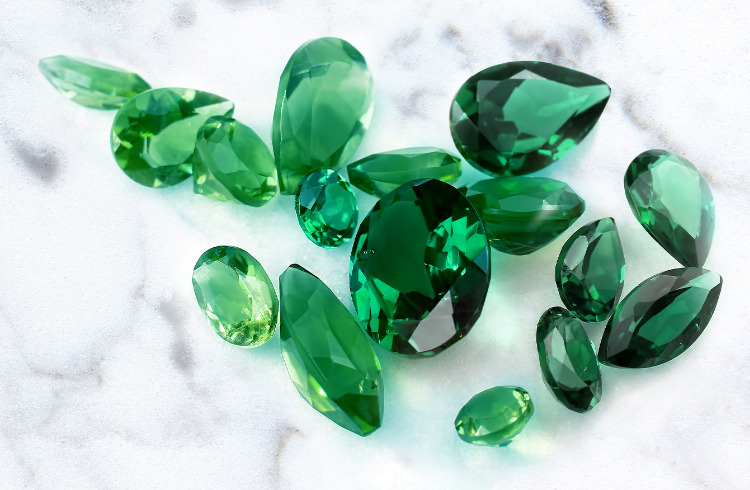 The verdant color of Emerald had captured the imagination for generations. The Emerald City of Seattle, in the US state of Washington. Ireland is called the Emerald Isle. Thailand’s most sacred religious icon is called the Emerald Buddha (although it’s actually carved from green jadeite). Today we dive deep into Emeralds to learn more about this May birthstone.

What is the Birthstone for May, Meaning, Health Benefits & More:

We’re all in awe of May’s verdant and glossy glow. The season is infused with life from blooming bulbs to the flash of green that means summer is around the corner! The Emerald color of May’s birthstone is the perfect and emblematic gem for this time of year.

“What is the birthstone for May?” Meet the enchanting Emerald. Here’s everything you need to know about this viridescent gemstone.

“The most abundant hue in nature, the human eye sees more green than any other color in the spectrum,” says Leatrice Eiseman of the Pantone Color Institute. “It brings a sense of clarity, renewal, and rejuvenation, which is so important in today's complex world.”

The Emerald has always been one of the most treasured among gemstones. Once the preferred gemstone of India’s Maharajas and Egypt’s most famous female Pharaoh, Cleopatra, the Emerald continues to ooze glamour, from royals regalia to red carpets. The name for this May birthstone comes from the ancient Greek word for green, “smaragdus.” Emeralds were mined in Egypt, dating from at least 330 BC into the 1700s.

Taking their name from their famous Queen, the Cleopatra Mines, also known as the Mons Smaragdus (Emerald Mountains), were one of the oldest mining complexes of the ancient world.

When Spanish explorers invaded the New World in the sixteenth-century, Emerald from what is now Colombia was a significant part of the plunder. Incas had been using Emerald in their jewelry and religious ceremonies for over 500 years by the time the Spanish arrived.

Far more interested in gold and silver, they traded Emerald for precious metals. Along the way, their eyes were opened to the majesty of the Emerald and the trading opportunities they presented to European and Asian royalty.

Today, Columbia is the largest supplier of Emeralds, responsible for more than 60 percent of world production. Emeralds are also sourced from Brazil, Zambia and Zimbabwe, while historically Emeralds were also mined in Egypt and India.

“...No color is more delightful in appearance. For although we enjoy looking at plants and leaves, we regard Emeralds with all the more pleasure because compared with them there is nothing that is more intensely green.”
- Pliny the Elder -

Emeralds have long been valued for their unique properties. Legends tell that Emeralds allowed the wearer to foretell the future. When placed under the tongue, Emeralds were said to reveal the truth and protect against evil spells. Some tales say that wearing an Emerald could make one an eloquent speaker. In times before modern medicine, Emerald was used to cure diseases like cholera and malaria.

Emerald is associated with the heart chakra and is thought to have a healing effect on the physical as well as the emotional heart. Emeralds bring loyalty and enhance unconditional love, unity and promote friendship. Keep your Emerald birthstone close to bolster balance in your partnerships.

Attributes of the Emerald

Green is a color that brims with hope. Heralds the coming of spring, regeneration, and new growth, its lush green color makes Emerald birthstone the perfect choice for the month of May.

This bluish-green variety of the Beryl family has long been adored for their rich, exotic color created when chromium, vanadium, and iron are present. Emeralds typically have inclusions that may be visible to the naked eye. Because of this, we recommend cleaning your Emerald jewelry with a mix of mild soapy, water, and clean with a soft-bristled brush (like a toothbrush). Avoid chemicals and harsh professional cleaners like ultrasonic or steam as these can damage the gem.

Alternative Birthstone for May

If Emerald birthstones aren’t your thing, don’t panic! Green Onyx is a beautiful alternative birthstone for May that taps into our desire to grow and be close to nature. Strength, willpower, and discipline are properties that are most closely linked with Green Onyx. Connected with your heart chakra, Green Onyx creates a bridge between your upper and lower chakras. With strong associations to the planet Mercury, Green Onyx imparts self-confidence on the wearer and is thought to relieve tension and stress.

“Two birthstones?!” you may be thinking. “Why don’t I have more than one?” Don’t sweat! Most birthstones have a modern alternative. There are many ways to determine your birthstone. The Victorian era saw the rise of the traditional month format we know today. In the 20th century the National Association of Jewelers along with Tiffany’s and other gemstone jewelry purveyors released a list of official birthstones. Over the years this has been updated with new gems to reflect the public taste.

There are also stones associated with your Zodiac sign and numerology, so you have plenty of choices! If you’re still unsure, you can find your birthstone using our comprehensive birthstone chart.

Want to learn more about birthstone meanings? Check out our birthstone guides by month: