Opal The amazing October birthstone
and its properties 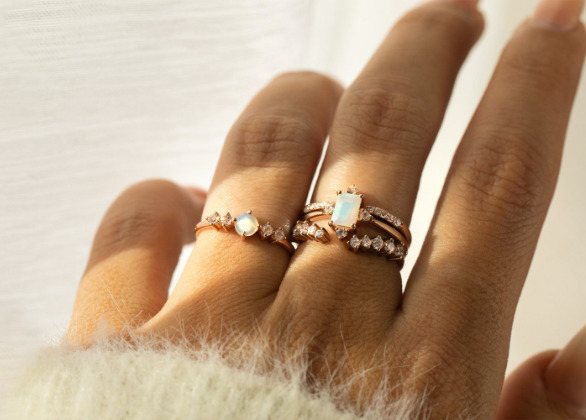 Opal The amazing October birthstone and its properties

Opal is one of two stones celebrated as the October birthstone, the other being tourmaline. Supposed to bring confidence and hope to the wearer, if you know someone born in this month, getting them a piece of opal jewelry is the perfect way to capture your desires for their future. Thanks to the large variety of colors the stone comes in, you can even find some that mimic the shades of autumn.

The October birthstone, Opal is a mineraloid formed by the process of gradual natural heating of silica gel found in the cracks in rocks. It comes in two varieties, precious and common, based on the ability to produce the play-of-color effect under exposure to white light.

While not as rare as it used to be before the discovery of rich mines in Australia, its varied colors and their interaction still make opal birthstone a prized and cherished gift.

The origin of the word ‘opal’ is still shrouded in some mystery. While most agree that it can be traced to the Latin word opalus, first recorded in 250 BC, it is still a matter of debate where did that term comes from. Some believe that it has its roots in the Ancient Greek compound opallios roughly translated as ‘to see a change in color’, while others suggest the Sanskrit word upala, meaning ‘precious stone’, as a likelier source.

Owing to the fact that opals often display a captivating interplay of various colors, it has also been known as the Queen of Gems. It was believed to contain all the virtues associated with different monochromatic gems whose color was represented in a particular stone.

When it comes to the opal birthstone meaning and symbolism, the stone has been traditionally associated with loyalty, faithfulness, purity, hope and confidence. It is believed to be imbued with beneficial properties relating to vision, both in terms of eyesight, and internal visualization, i.e. imagination and dreams.

Before rich deposits of opal, the birthstone for October, were discovered in the 19th century in various locations in Australia, and before the opening of the trade routes with the other larger exporters, the stone was quite rare in Europe. While deposits have since been located in various countries, including the United States, Mexico and Ethiopia, European aristocracy was for a long while limited exclusively to opals found in one location in what is present-day Slovenia.

This rarity made it a highly prized possession, and one claimed to have powerful magical properties. Aside from the widespread belief that it was capable of bringing good fortune to its owner, some went so far as to claim that it could also bestow invisibility when properly used.

That is not to say that this stone didn’t have its own share of bad reputation as well. Aside from the fact that the opal was associated with the evil eye in Russian superstition, its popularity also received a heavy blow from a very well-read novel by Sir Walter Scott, published in 1829.

The novel featured an opal which cracks and becomes colorless when splashed with holy water, and ultimately causes the demise of its owner. The novel was so popular and its influence so great that it managed to put a significant dent into the sales of the stone for the next two decades after its publishing.

However, as superstitions waned and new deposits were discovered, revealing opal birthstones with color schemes that were never seen before, the popularity of the stone recovered, and in addition to being the October birthstone, it’s of the most admired and cherished gemstones we know.

Our Favorite Ways to Wear Opal

While its multicolored nature is enough to make the October birthstone, opal very appealing and interesting, it’s not what made the stone so popular. What really managed to set it apart from other gemstones is the interaction of those colors and the prismatic flashes they produce when illuminated.

As a matter of fact, the presence of those interactions and flashes is known as play-of-color and is what differentiates precious from common opals. If the stone fails to produce rainbow-colored iridescence when you hold it up to the light, it is of common, or even synthetic variety.

Translucent or opaque, most opals can be said to have one base color, interspaced by a smaller or larger variety of others. These colors range from yellow and red, across turquoise nuances, all the way to milky white. Due to the specific way it is formed, it’s not uncommon to encounter opals that are completely unique to a single location or region and cannot be found anywhere else in the world.

One of the most popular stones of this kind is the black opal, most of which comes from the town of Lightning Ridge in Australia. As their name implies, these stones have a dark background, ranging from black to dark blue or grey. They are somewhat opaque, with broad, rainbow-colored patterns on the surface. While it might be expected to soften it, the dark background actually accentuates the play-of-colors and gives this birthstone for October, opal, a dignified, solemn look.

What really managed to set it apart from other gemstones is the interaction of those colors and the prismatic flashes they produce when illuminated.

Since it is the place that more than 95% of today’s world supply of opal hails from, it is not surprising that Australia can boast several more completely unique varieties of this gemstone. This includes the white opal found only in several locations in the country, including Coober Pedy and White Cliffs; as well as boulder opal, which has the presence of ironstone to thank for its reddish hue, available only from one location in Queensland.

Naturally, Australia is not the only place that can boast the October birthstone. Mexico, especially the state of Querétaro is home to another highly prized variety of this stone, namely fire opal. They are usually almost translucent with the base color ranging from yellow to red. They also come in the precious and common variety, with the ones that don’t show iridescence also being known as jelly opals.

While these are some of the most popular varieties, this is by no means where the list ends. Peruvian blue opal is also worthy of mention, as are different crystal-clear stones found all over the world.

Even some types of common opal became very well-known and admired, despite the absence of play-of-color typical for precious stones. Some of the more popular common opals include the amber-colored resin opal; grey or brown menilite; colorless and translucent hyalite, and finally wood opal. Even without the iridescence, the mixture of different colors makes these stones rather attractive, and they can, naturally, be found at much lower prices that their shinier cousins.

Because of their enigmatic color, opals have been associated with rainbows, butterflies, and hummingbirds in traditional folklore. 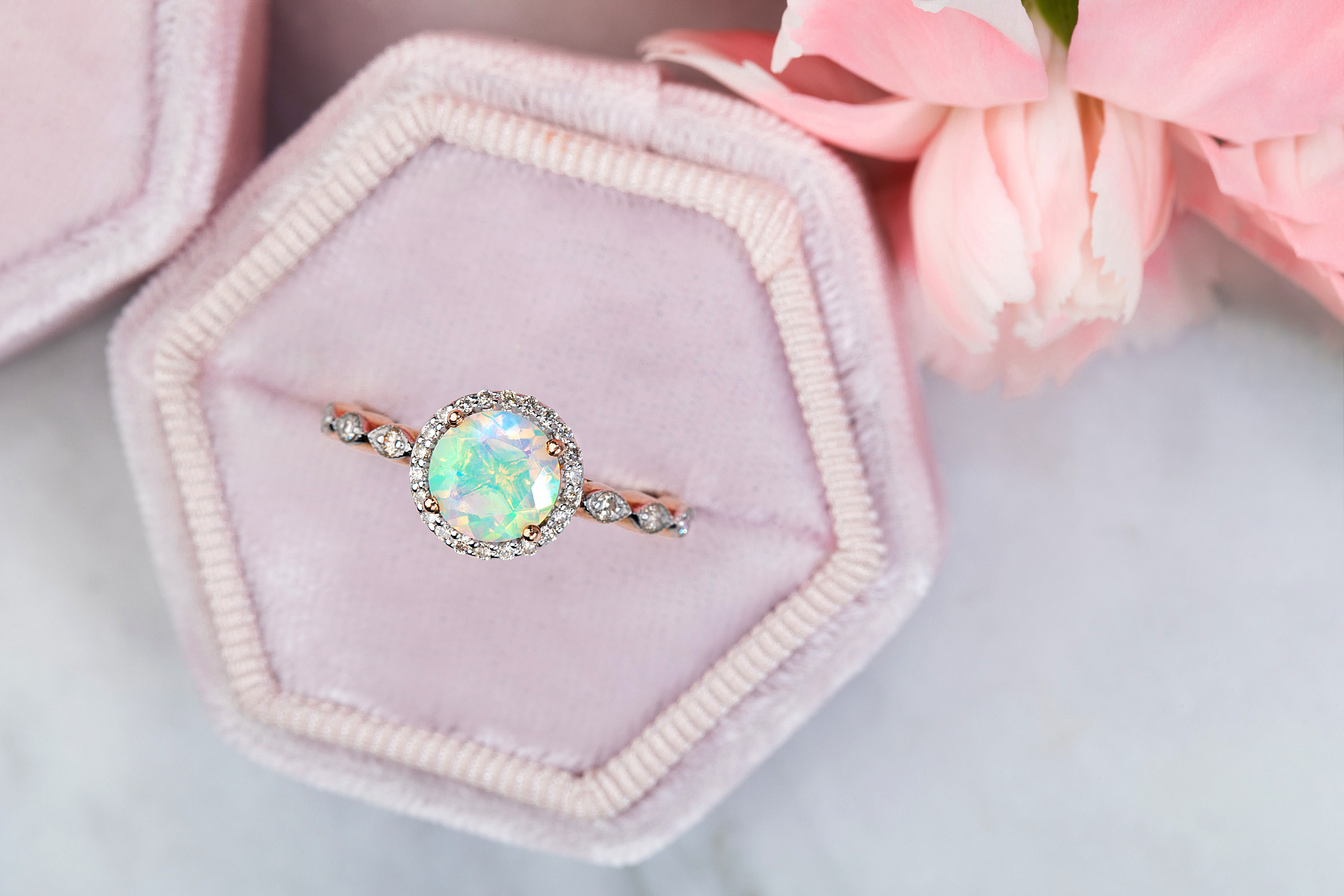 Opals are considered the “queen of the gems” because they contain the colors many other gemstones. 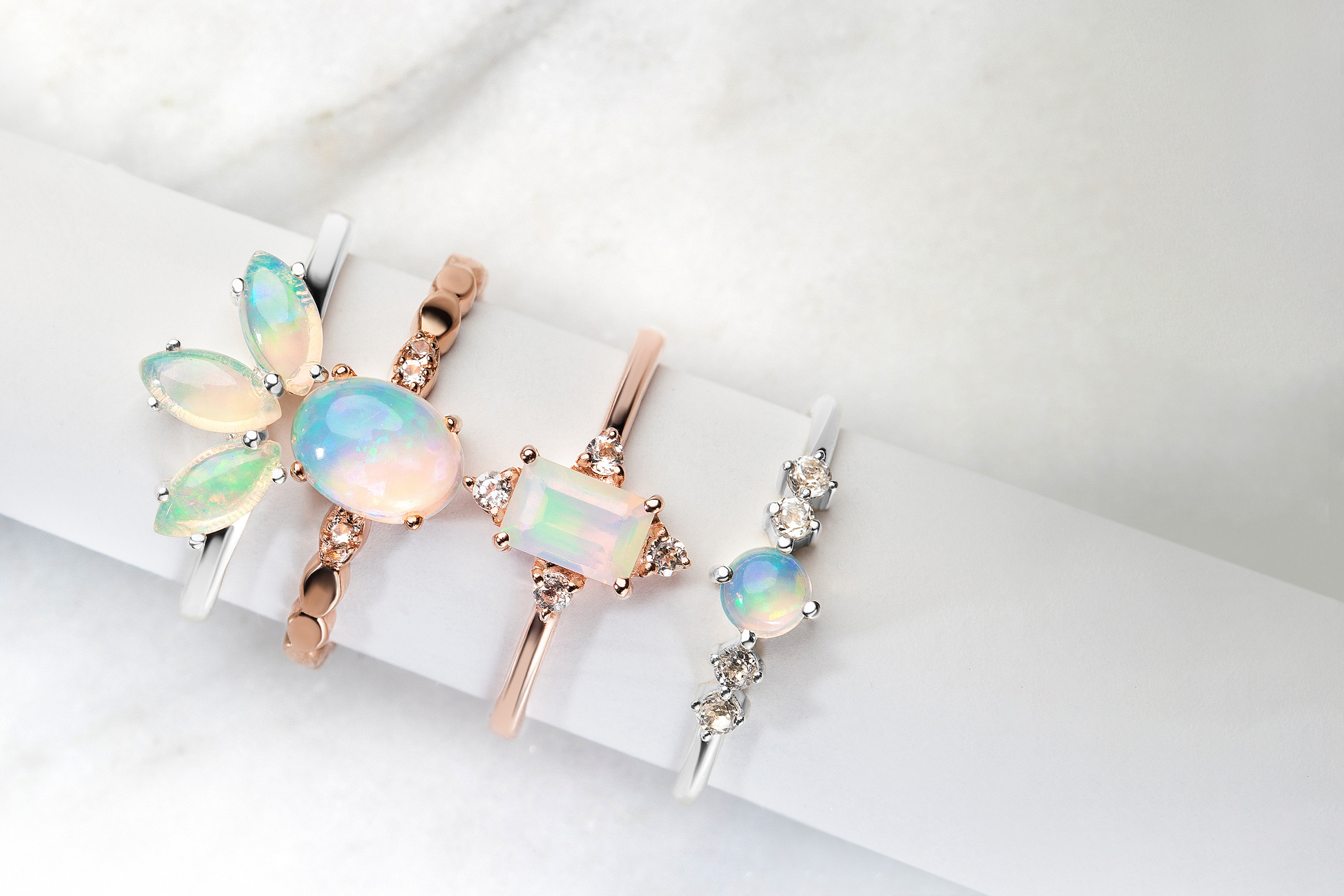 Precious opals offer a shimmering kaleidoscope of colors known as play of color when worn in changing light. 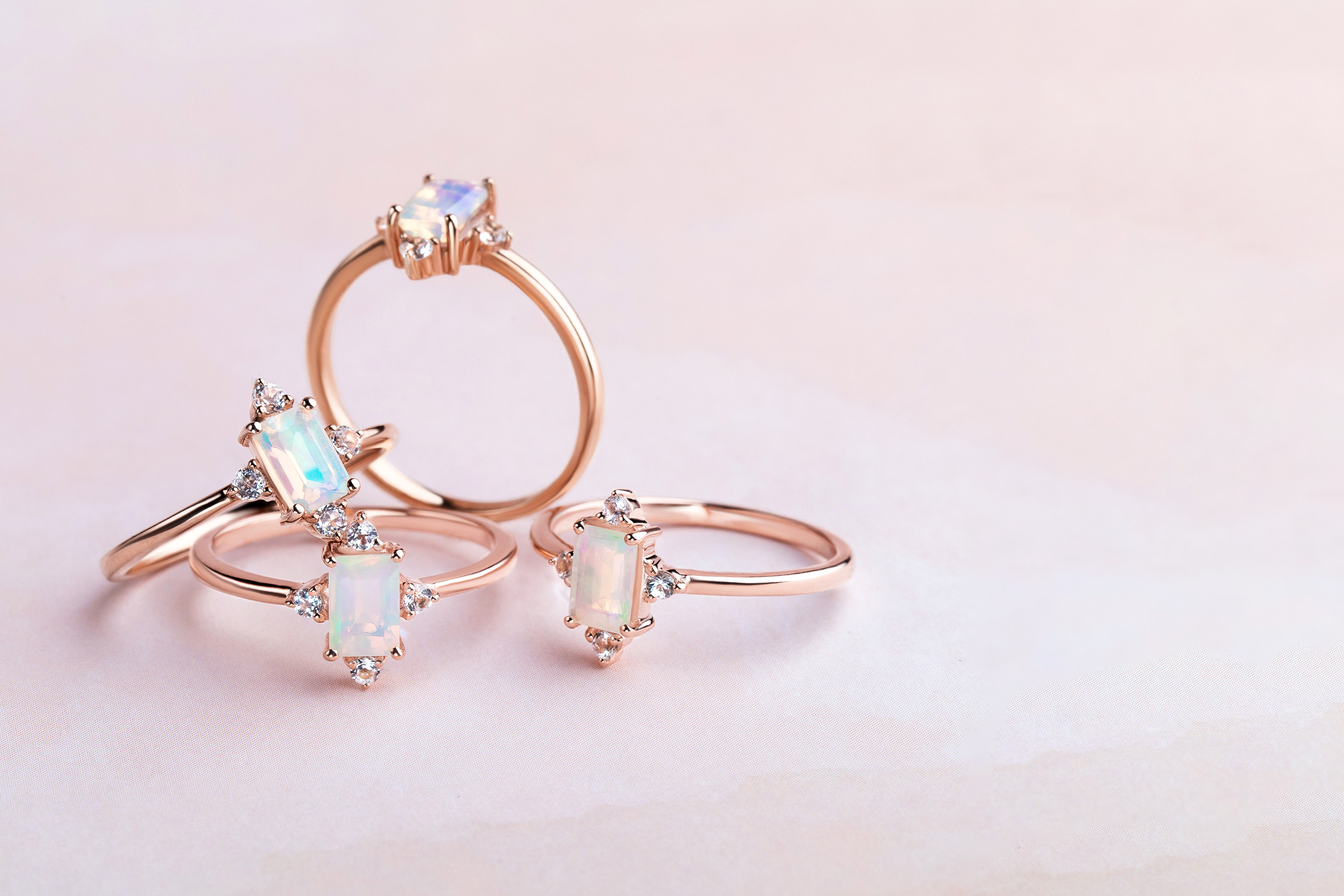 Opals were a favorite stone of Queen Victoria. She gifted an opal ring to each of her five daughters on their wedding days. Check out our favorite Opal designs now. 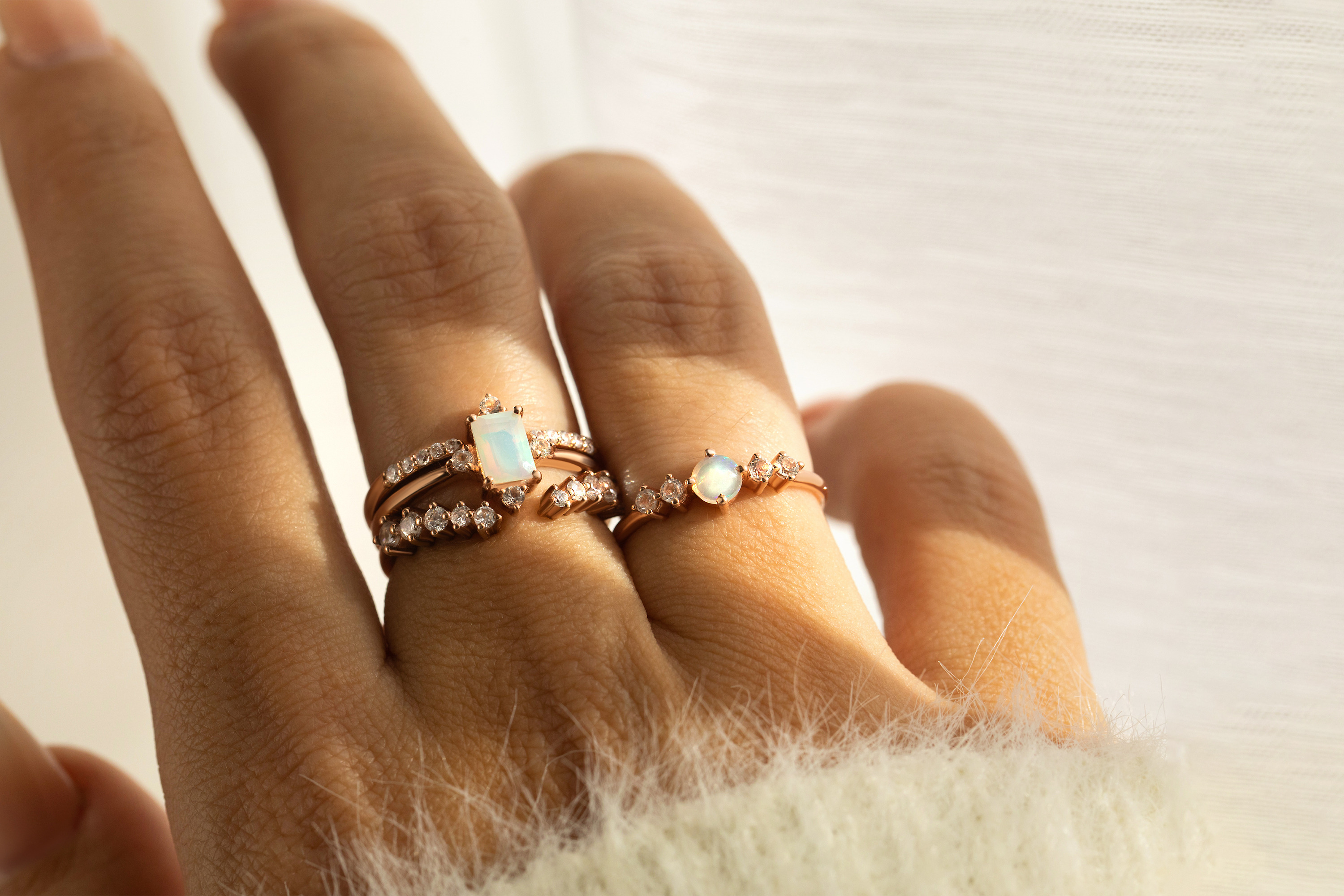 How to Care and Clean Opal Rings

Since the major portion of the effect created by opals comes from the spectacular interplay of colors created by refractions, even minor scratches or grazes can drastically impair the beauty of the stone. This means that proper care and maintenance of your authentic opal rings are essential if you want to keep the stone pristine.

Due to its relatively high concentration of water (up to 30% in some stones), opal is much more susceptible to damage from heat or from sudden temperature changes. Unless you make sure to provide a cool environment for your October birthstone, opal might actually start developing cracks and scratches, which might completely ruin the beautiful play of light. For the same reason, you should also ensure that the environment is at least slightly humid. You can achieve this by simply adding a soaked cotton ball to your jewelry box.

Because of their porous nature, opals are not to be cleaned by detergents or jewelry cleaners, as they contain acids and chemicals which might cause significant damage to the stone. In order to ensure its longevity, you should clean your opal jewelry with a mixture of warm water and soap. Even then, try to keep the procedure as short as possible. Since opal doublets and triplets are held together by an adhesive, too much exposure to water can result in the weakening of the binding matter and serious deterioration of the stone.

Aside from being porous and containing an unusually large percentage of water, there is another thing making opals somewhat more delicate than some other gemstones. Namely, opal is a relatively soft stone, with only a 6 on the Mohs scale of hardness. This makes it relatively prone to mechanical damage, like scrapes and abrasions, and necessitates some extra care.

Aside from being careful when wearing opal jewelry not to bang it against hard surfaces, you should also mind how you store it. Most popular types of precious stones, like emeralds, sapphires, rubies and diamonds, are much harder than opals, and quite likely to scratch it if they were stored together. That’s why it would be best if you kept your opals separate from the other stones, like we mentioned, in a cool, humid environment.

A beautiful stone, for a long time highly prized by the European nobility, Opal is the birthstone for those born in October, and still manages to catch the attention of people all over the world.

With a wide variety of base colors ranging from milky white to deep dark shades of black, these translucent or opaque stones are characterized by a spectacular play of colors covering the entire spectrum of the rainbow.

For a long time believed to be able to bring good luck to its wearer, opal birthstone is associated with virtues like purity, loyalty and hope, and was at one point dubbed the Queen of Gems as it incorporated the colors of various other precious stones.

While Australia is by far the largest exporter of opal, this gem can be found in various other locations, including Ethiopia, Mexico, US, Peru, Turkey and others.

Even though it is no longer as rare as it used to be, opal birthstone still manages to capture people’s hearts, and makes a perfect gift for a loved one born in October.