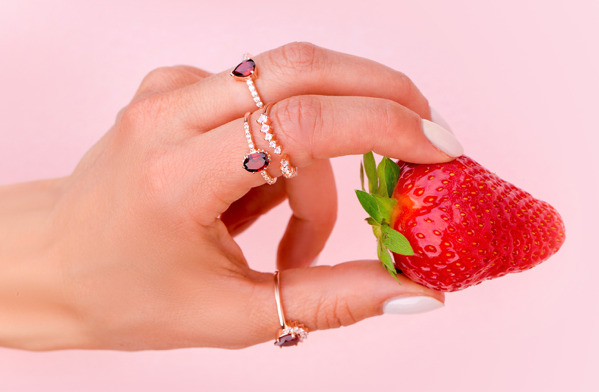 Ruby red lips. Ruby slippers. Few gemstones in history (except maybe diamonds) have made as much of an impression on pop culture. Rubies are rich in color and folklore, and for centuries, have signified wealth. They’re the birthstone for July, and our gemstone spotlight.

The Royal Ruby: What is the Birthstone for July?

Traditionally, ruby is the birthstone for July. And unlike other birthstones with modern alternatives, ruby has seen few rivals to its throne. Since first making an appearance on the high priest’s breastplate - which many believe to be the origin of our modern birthstones - ruby has worn the crown. Though diamond jewelry may get more attention, the rarest rubies can command the highest per carat prices ever recorded.

The stunning July birthstone has been worn by royalty in India and Southeast Asia for generations, and some of the world’s finest rubies have been found in Burma (Myanmar). American film icon Elizabeth Taylor has always been a fan of the beautiful, blood red stone. A matching diamond and ruby necklace set once owned by the star hit the auction block in 2011 and earned a cool $5.4 million (maybe we should start looking for richer husbands).

Another swoon-worthy Burmese ruby known as the Jubilee Ruby brought in a record setting $14.2 million at Christies in 2016 to become the highest price ever paid for a colored gemstone. According to the auction house, the gem’s natural fluorescence and rich coloring (caused by chromium in the soil) played a big role in the ruby’s value.

“The ruby crystals from India are said to be pieces of the spear of Lord Krishna, used during the Vedic ages to vanquish the Lord of Destruction from the Earth.”
- Melody -

July Birthstones on Display: Other Famous Rubies in History

A visit to the gem gallery at the Smithsonian National Museum of Natural History is a great way to get up close and personal with a ruby birthstone - millions of dollars not required (actually, admission is free). Donated by philanthropist and Subway restaurant investor Peter Buck in honor of his late wife, the Carmen Lúcia Ruby wows Smithsonian visitors with its 53 carats and rich color most accurately described as ruby red.

Two other notable rubies in the national collection exhibit a unique phenomenon called asterism. Formed when titanium atoms get trapped within a growing crystal, this radiant effect (similar to chatoyancy or cat’s eye) reveals a starlike shape within the ruby. The Rosser Reeves Star Ruby and the Star of Katandru are both fine examples of asterism in the July birthstone.

Another famous, or shall we say infamous, ruby is known as the Liberty Bell Ruby. This carved gem weighing over 4 pounds went missing after a 2014 jewelry heist, and though arrests were made in connection to the episode, the stolen gem is yet to be found. The Liberty Bell shaped piece was created for the US Bicentennial in 1976 and also contains 50 diamonds - one for every state.

Imposters or All in the Family? Ruby Relatives, Lookalikes & Fakes

As we went down our list of the world’s most famous ruby birthstones, you may have been thinking about the British crown jewels. Mind you, this omission was intentional. The stunning red gemstone in the Imperial State Crown is not a ruby at all. Known as the Black Prince’s Ruby, the centerpiece of the opulent English crown is actually a spinel.

Though honored in India for its gorgeous red (and sometimes hot pink) coloring, the spinel or Balas ruby has gotten a bad rap in Western cultures. Like garnets, spinel gemstones have been mistaken for the ruby birthstone in the past, and can even be found in the same mines. Though many gems have lookalikes, transparency and pricing are key. As long as you’re getting the gemstone you think you are, any gem is fair game. We love spinel and garnet jewelry, and think you should wear what looks good and fits your budget.

Another fun fact: rubies and sapphires are chemically the same stone. They’re both part of the corundum family, and according to the Gemological Institute of America, the jury is still out on where to draw the line. Some say rubies are red, sapphires are blue. The term ruby comes from ruber, the Latin word for red, so we’re willing to rule out the blues. But where does the pink sapphire lie? Geologically speaking, what is the birthstone for July? Perhaps you should sport a blue sapphire if it’s more your style. Chemically speaking, they’re all corundum.

The King of Precious Stones: The Radiant July Birthstone

In his treatise on the mineral kingdom, Roman naturalist Pliny the Elder spoke of ruby under the name carbunculus, a Latin word for glowing coals. Its later descendant, carbuncle, went on to describe a red gem more specifically, and in the 15th century, was used as a synonym for something of great splendor. When they’re exposed to UV rays, rubies can exhibit fluorescence, further tying the July birthstone to flames and fire.

To Indians, who likely had access to rubies far earlier than Europeans, the ruby is called ratnaraj, Sanskrit for king of precious stones. Corundum, the family name for both sapphire and ruby can be traced back to ancient India as well. We get the word from korund in Hindi and kuruvinda in Sanskrit. Padmaraga, a word meaning red lotus, was often used to describe the most desirable rubies. As legend has it, owning a ruby in ancient Indian culture would ensure wealth, success, and a long life. And according to one Indian gemstone scholar, some of the world’s most valuable rubies might still be hidden away in the safekeeping of the country’s oldest noble families - unknown to museum visitors, auction houses, and the rest of the world.

Excited to learn more about birthstones? Check out our birthstone by month list, or one of our in-depth articles about these intriguing gems. We’ve delved into the watery depths with aquamarine, discovered our obsession with diamonds, shined a light on the enigmatic opal, and covered three birthstones for December.

Haven’t found your birthstone yet? Drop us a line. We love hearing from fans and are constantly creating new jewelry. Who knows, your favorite gemstone could be next.