What Is Moonstone jewelry? 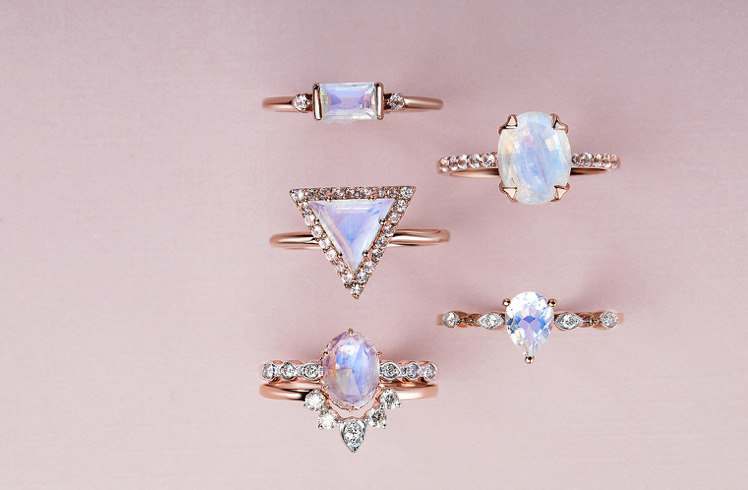 What Is Moonstone jewelry?

Magic Of The Moon: A Look At Moonstone Jewelry

In a somber night where the moon shines at its brightest, a veil of thin clouds pass by. The spellbinding play of light that it gives the clouds is depicted in a milky, bluish iridescence. And this enchantment is the magic of the moon seen on Moonstone.

As old as the moon, it possesses a mystic gift. It holds our inner truths, dormant beneath its pearly shroud. And with its vigor, the hidden bits of the soul is brought to light. Since our connection to the moon has long been embedded far beyond time, we are perpetually linked to its different faces. Crowned as a spark for lovers’ passion, travelers’ protective talisman, a medium for prediction, and a way to enlightenment, Moonstone is a slice of the powers of the moon that you can wear.

Moonstone is a Feldspar mineral revealing a lax opacity and a gleaming white façade known as chatoyancy or “cat’s eye” – the band of light that moves. Some call it adularescence for its mysterious glow that changes in position every time the stone is moved. Moonstone can be seen in subtle hues of blue, white, peach, gray, and a gaudy kind called the Rainbow Moonstone. In ancient times, stories were told about how people see the creamy silver brilliance from the crescent to the ebbing stages of the moon.

Revered in many countries for thousands of years, Moonstone held a vital role in India, China, Ancient Rome, and Middle Age Europe. It was used by monks, spiritualists, and other mystics who have renounced materialism to pursue their inner journey. It abolishes superficiality and fortifies the faith of religious people all over the world.

Moonstone is a staple gem in Roman jewelry for almost two thousand years as they believe it unfolds the Moon Goddess’ image; Diana bestows wealth, love, wisdom, and victory to the wearer of the stone. An Asian legend professed that the greatest blue Moonstones are brought by the tides every 21 years, while other legends claim that it can give the powers of prophecy.

Moonstone jewelry boomed in the Art Nouveau period, and it was famed in Europe when it was said to reunite couples and heal insomnia. In the 60’s hippie era, Moonstone matched the otherworldly look the wearers were going for. And in the 90’s New Age period, designers sought for Moonstone’s esoteric beauty for spur and inspiration.

Moonstone has always been a sacred stone in India. It was only exhibited to be sold if it’s on a yellow cloth since yellow is a sacred color. As the stone of gods and goddesses, it helps in killing the ego to achieve spiritual clarity. Implanted on the forehead of Ganesha, the four-handed god of the moon, Moonstone is believed to have lived since the beginning of time. With its color and the deity it signified, it has reached a milky luster together with the waning and expansion of the moon. Its final guise earned its name, Moon Stone.

As an emblem of passion for lovers, it has become a customary wedding gift. It also allows them to read the future, but in order to gain this power, they must place the stone in their mouths during the full moon. The gem may have originated in India, but it is now reveled around the world for its ethereal radiance and supernatural charm, making Moonstone pieces of jewelry a must-have in the New Age movement of today and for centuries to come.

The strongest in Moonstone’s arsenal of powers is it may be the best gem ever found to harbor one’s psychic abilities. There are stories of people touching the stone for the first time and experiencing out of this world visions that have greatly contributed to their lives. Moonstone was dubbed as the "phenomenal gem" of the Orient that can only be worn on Mondays, while it is titled as the “gem of winter” in ancient lore.

The gem is said to lose its shimmer if the wearer has a lot of anger bottled deep within. For wedding anniversaries, some cultures consider Moonstone as a gift for the thirteenth year of marriage and the succeeding thirteen years after that because they believe that the wisdom of the stone will diminish the negative connotation for thirteen – widely known as the number for bad luck.

The brilliant gem is used as a Traveler’s Stone. Those who travel by night or above water are protected especially if the moon is shining. It was used as illumination in the earlier times when electricity wasn’t conceived yet. Now, it is used as illumination for the dark times of life in general. And because of Moonstone’s elevating energy of hope, it has long been worn as a talisman to protect the explorer and boost his or her personality. For those who travel all the time, aside from wearing the beautiful gem, you may place one in the glove compartment for smooth driving and to help prevent road rage.

The gem isn’t a symbol of love not just because of its heavenly beauty, but because of its healing effect encompassing love. Moonstone lets the heart see and feel deeply so that you can begin to accept what unconditional really means. It is a crystal for new love, an all-embracing gem for hidden love, and a talisman to reconcile loved ones who had anger when they parted.

Moonstone is also the gem for passion and sexuality. It stimulates the couple’s kundalini energy and eroticism. When it is worn while making love during full moon, the bodies are synchronized to the lunar cycle. As a crystal for fidelity and fertility, some women use thirteen Moonstones to make a grid with the twelve months forming a circle around the bedroom and one placed under the bed.

Mainly named as the greatest psychic gem, Moonstone healing properties harmonizes all the different energies of our biological and spiritual makeup. It helps in the distribution of nutrients in our body while washing toxins away and healing digestive system disorders. It’s used by children and teenagers to help them grow taller and by older people as an anti-aging stone. This includes hair, eyes, and skin.

As for the emotional aspects, it is known to calm and soothe the heart. With its balancing energies, the wearer does not express or repress the emotion, but rather simply trust the Higher Will. Because it can pinpoint emotional patterns that had become bad habits, it can also filter volatile thoughts and replace it with a more balanced approach. This can be achieved by placing Moonstone at the Moon Center or the middle of the chin.

Moonstone gifts the wearer a flash of feeling and compassion to one’s self that ultimately brings inner happiness. Since it’s also linked to the feminine energies, it amplifies our intuitions. It is mostly used by women to enhance their psychic and kundalini powers. As for men, the crystal makes them more in-sync with their feminine nature to bring an equilibrium to their emotional and rational sides.

How to Use Your Moonstone

If you want to make a wish, hold the gem in your right hand and breathe your thoughts. Leave the stone outside during full moon until the next full moon so it can naturally harbor the moon’s energy. Whisper your wish by your window every night until it’s time to bring the gem back inside. After that, all you have to do is keep it near you and your wish will come true.

If you want to change something in your life, bathe under the full moon while holding the Moonstone. Close your eyes, run the things that must be changed in your mind, then say, "Mother Moon, take these trials from me". Say this every night until the new moon. And on that night, bury the gem along the roadside far from your home, then leave and don’t ever look back, knowing that part of your life will never come back.

For those who have sleeping problems, hold the Moonstone in your hand before going to sleep. Ask for a smooth rest, then put it under your pillow. Witness the boundless effect of Moonstone by using it on a full moon.

The New Age movement has introduced different gems to guide us in our unique journeys. Most of the stones are just too riveting to not be in the mainstream spotlight. Simply for their beauty, many crystals and gemstones all over the world have been incorporated in jewelry making. These days, celebrities grew fond of the quirky designs of Moonstone jewelry that it is worn simply for fashion purposes.

But those who are aware of its healing effects know that there’s something beyond its rainbow glimmer. Moonstone jewelry is famed for its playful lighting, but it’s a worldwide phenomenon because it has the magic of the moon.

Wanna discover our full Moon Magic collection? Feel free to take a glimpse at our Moonstone jewelry to get inspired.