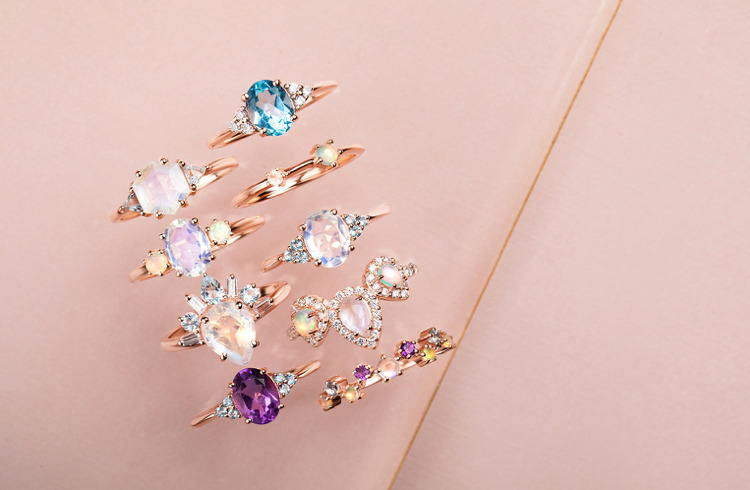 Gemstones capture the bohemian spirit. They’re a vital part of the free-flowing spiritual movement that has flourished since the 70’s. And while most of us would buy a gem for its healing and protective energies, some are just simply captivated by its color and patterns. There’s nothing wrong with that though. Because we may not admit it, but we are initially drawn to looks! And it’s okay, we’re human. The good thing about the physical beauty of gemstones is there’s more to it than that. They go deeper!

So maybe buying a gem for its enchantment is just the first step to discover its natural powers. Maybe that’s why you’re attracted in the first place because it is meant to be a part of your life. It calls to you, and who wouldn’t answer to a beguiling gift of nature?

Bohemian culture exhibits a playful charm that has profundity leading to truth. And these gemstones truly represent their eclectic flavor:

Resonating love, warmth, and joy, this delicate pink crystal is known as the Love Stone. It emits strong vibrations within the heart chakra. Rose Quartz can aid you in relationship problems and emotional healing. When worn as a necklace, it will reverberate around your whole aura and in turn, let you feel compassion for every being in the world. It can open your heart to see the beauty even in the littlest things.

Amethyst evokes the energy of the violet flame. As the color of the third eye chakra, the violet shade of this stone can bring deep spiritual growth. It signifies devotion, modesty, and wisdom. Amethyst is worn by ancient Egyptians to protect them from guilt and fear, while shamans and healers use it to enhance their focus. It is also known as the Bishop’s Stone that is worn by Catholic bishops.

The fusion of colors inside an Opal gem is just breathtaking. Widely known as the birthstone of October and a themed gift for the 14th and 18th wedding anniversaries, Opal denotes loyalty, happiness, and faith. White and green are the popular shades, while red and black are the scarcest. In mystic circles, Opal is said to bring the power of invisibility if it is wrapped in a bay leaf and held.

Larimar sets the viewer in a trance with its blue hues mimicking the soothing ocean waves. Aside from its many names as the Stefilia’s Stone, the Atlantis Stone, and the Blue Beauty of the Caribbean Sea, it’s also a healing gem that syncs the body and soul. Larimar gained its name as the Atlantis Stone as it is found only in the Dominican Republic, which was said to be part of the sunken city.

The moon is deemed sacred in the bohemian culture. Having a piece of Moonstone jewelry with you is like holding a piece of the powers of the moon. Aside from looking like it, it holds the energies of the lunar cycle. The beautiful play of light seen in Moonstone was said to appear in the waning and waxing of the moon in the early times. It’s a psychic stone used by monks and mystics around the globe and a spellbinding gem that exemplifies the boho flair.