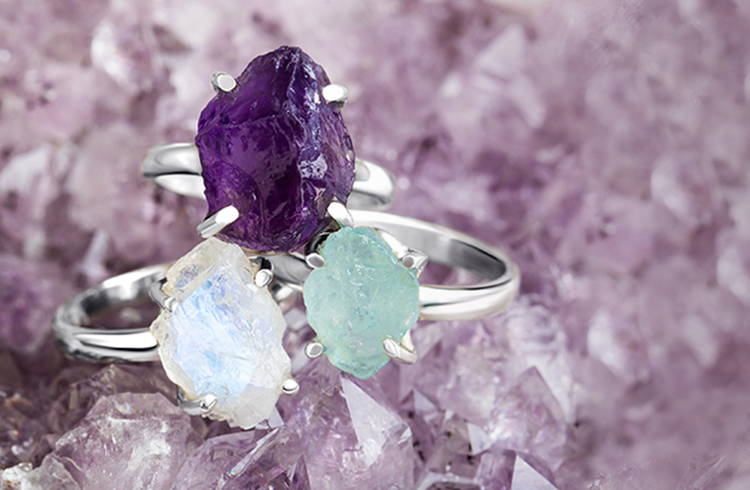 Elaborately cut gems have been the object of admiration for a while now, but before we developed the advanced techniques of processing and shaping these precious stones, they have for millennia been used in their natural rough form.

Seeing how our appreciation for aesthetics seems to be somewhat cyclical in nature, it’s no surprise that the interest in these rough-cut gems is being reignited once again.

Aside from the contrast between the glamorous lights and the modest, unpolished form, there are a number of other factors contributing to the fact that raw crystal jewelry is becoming increasingly popular.

For one, they seem closer to nature, less marred by any kind of human intervention, making their beauty somehow more honest and complete. Raw gemstones also strongly evoke a sense of connection to our past. Their rough shape helps them retain some of their true nature, and is a testimony of their long journey to your jewelry box. Mixing nostalgia with modernity and modesty with extravagance, raw gemstones are coming back into the spotlight which they never completely left.

Even if you are fairly adept at guessing which gemstone you are dealing with, if you are used to seeing them cut, raw gemstones identification might pose a bit of a problem. Since they look quite different in their cut and raw forms, trying to determine the type of a freshly dug up gemstone can be quite an ordeal, and is not something that can just be improvised.

So, let’s say you are an amateur collector, looking for gemstones and trying to differentiate between the precious stones and the worthless rubble. In case you have actually found what you believe might be a gem in its natural environment, you still have a lot to do before you can identify its type with any degree of certainty.

The first thing on the list is cleaning the gem in question. While you might want to rush through this part of the process, and get to see the stone in all its unrefined beauty as soon as possible, carelessness and haste could cost you dearly. Namely, most methods and chemicals that would make the process faster could also do irreversible damage to the stone. At that point, the sweet anticipation and hopes that you have stumbled upon something actually valuable get turned on their head, and you instead start praying that the stone you’ve just ruined has actually been worthless all the while.

If you want to do this part right, the rough gem, along with all the impurities it came with, should first be soaked in warm water for several hours. The purpose of this step is simply to allow all the dirt and clay to gently slide off of the gemstone, leaving it more open to inspection.

After soaking it, the stone should be gently dried with a nonabrasive cloth, at which point most of the impurities will fall off, leaving you to deal with the most persistent bits, usually lodged into crevices of the gemstone. In order to get to these hard to reach places, you might want to use a sharpened match or a toothpick, and patiently remove the remaining pieces of dirt.

In case that the gem needs a more extensive cleaning after the soaking, you can gently scrub it with a nonabrasive brush, mindful not to press too hard and potentially cause scratches on the surface of the stone you are cleaning. Once you are done, the stone should be left to dry off naturally, in other words, don’t try to use a hairdryer to make the process faster, as the stone can be severely damaged by drastic changes in temperature.

Once the stone is clear of all impurities, you might try to identify the type of stone you are dealing with. While we would advise you against making the final judgment yourself, and instead leaving it to an expert, if you want at least an idea of what you might be dealing with, here’s how to go about finding out.

Since there is a great variety of precious stones out there, and a lot of them overlap in terms of colors they can display, sizes and formations they are usually found in, as well as a whole range of other factors, raw gemstones identification often comes down to the method of elimination. In other words, as you take in the stone’s features one by one, you are at the same time creating a list of likely suspects, and eliminating those that definitely don’t fit the description.

The first thing that you’ll notice is, of course, the gem’s color. Naturally, since pretty much every color is represented in numerous different gems, this alone will hardly be enough for you to tell what kind of a stone you are dealing with. The next logical step is to try and assess the gemstone’s transparency. Combined with the color, this is already giving you a somewhat better idea of the type of the stone in question.

This is where things get tricky, however. Unless you struck upon a unique color-transparency combination, further identification is almost impossible without methods like exposure to ultraviolet light and spectroscopic analysis. So, if you have access to the needed instruments you can proceed with the identification, if not, it might be time to call in an expert and finally find out what kind of gemstone is it that you have on your hands.

Once you know what type of gemstone you are dealing with, you need to make sure that you also know how that stone is supposed to be cleaned and stored. For instance, some stones are more porous than others, meaning that using acids or strong detergents for cleaning might cause serious damage. Others contain more water than typical stones and have to be stored in a cool environment with a steady temperature. Some gemstones are even photosensitive, meaning that they can start losing their color after prolonged exposure to sunlight.

Since most types of gemstones and jewelry can be cleaned with the help of mild detergents or commercially available jewelry cleaning fluids, we’ll briefly describe the process. Before we begin, though, you might be well-served to learn which of the popular stones can be cleaned this way. Among others, you can use detergent to clean: amber, amethysts, aquamarines, citrines, diamonds, emeralds, garnets, jade, lapis lazuli, malachites, opals, rubies, sapphires, turquoise, and topaz.

The process begins with you soaking the gemstone in a solution of your preferred detergent and warm water. After leaving it in for a few moments, you can retrieve the stone and gently scrub it with a soft brush, taking great care not to scrape the stone with any of the solid pieces of the brush.

Once you are done brushing the stone, you should return it to the solution for a few more moments and it is ready to be rinsed. Use clean running water of approximately the same temperature as the detergent solution, to prevent the creation of cracks caused by rapid heating and cooling of the stone. Now you can finally dry the gemstone with a soft cloth, or if you want to ensure that there are no water stains present on your stone after drying, you can cover it with dry maple wood chips which will absorb all the moisture, and which are then simply brushed off of the gemstone.

While raw gemstones may be a bit more difficult to inlay into different types of jewelry, when done with skill and taste, this can often produce amazing results. Since they never went out of fashion completely, we never stop finding ways to use raw gemstones in jewelry. In this section, we will cover some of the most commonly used forms of rough stones.

To start with an easy one, crystals naturally come in a shape that is not only very appealing, but also quite convenient when it comes to setting them in rings or necklaces. Naturally, they are most commonly found in pendants, as those can be made even by the most casual of hobbyists but there are various other types of raw crystal jewelry.

On the other side of the spectrum from smooth, naturally polished crystals, we have water-worn gemstones. Usually found in faster rivers, these gems are characterized by their irregular surfaces and shapes. While the angles have been softened by years of tumbling down the riverbed and interactions with other stones, these gems are in no way smooth. Because of their peculiar shape, they are most commonly held in place by an elegant cage, or they can be used as beads.

If you want your raw gemstone to still exhibit some luster, you can opt for sliced stones. While one of their sides remains rough and offers the scraggy charm typical for raw stones, the surface along which the gem was sliced will be perfectly smooth and refract the light as well as a processed stone would. Naturally, these stones are much easier to combine with different kinds of jewelry, which makes them quite popular.

Finally, some of the raw gemstones jewelry is made by applying a thin layer of minerals that developed in geodes or as plates. Known as druzy, these mineral formations can act as a background for a more prominent stone, or as the focus of the piece thanks to their interesting texture and the way they reflect the light.

While human ingenuity and skill in adapting nature to our needs is something to be admired, there are times when we need to take a back seat and simply let nature do its thing.

Even though we have come up with interesting ways to display the beauty of gemstones in all their lustrous glory, natural forces have been shaping some stones for much longer than we as a race have been around. While the products of the interactions of these forces don’t have to conform to our standards of beauty, when they do, they are really a sight to behold.

Don't forget to dive into our amazing jewelry collections and find a piece for yourself.