Moonstone then and now 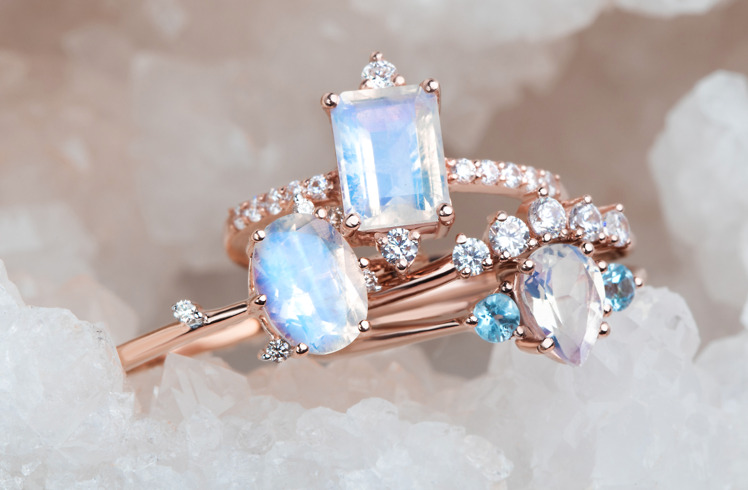 In vogue with the boho-chic trends of today, Moonstone is now seen in stacks of midi rings and talisman-like necklaces. It has appealed to the young generation as an eccentric bohemian piece. Jewelry designers have created fresh means to exhibit the radiance of Moonstone in artistic encasements fused with nature symbols. Simply for what its name signifies, Moonstone has drawn a huge following and continues to charm those who have quirky tastes.

Although before it was famed for its spirited iridescence, Moonstone has always been a sacred gem that was only used by monks. It’s also a psychic stone that aids in spiritual depth up to this day. Ever wondered why it is named as such? Here’s a quick look at the origin and powers of the Moonstone gem.

The light dance showcased in Moonstone is almost magical. It’s a natural phenomenon seen in rare gemstones and Moonstone is one of the lucky ones that has captured this unique occurrence. Sometimes called the “cat’s eye” for the band of light that moves and sometimes dubbed as adularescence for its esoteric glow featuring a silvery, bluish luminosity, Moonstone comes in blue, white, peach, gray, and a whimsical kind called the Rainbow Moonstone. Its effulgence is said to be seen in the crescent to the ebbing stages of the moon during the ancient times.

As Old as the Moon

The energy of the moon has been etched in our psyche since the beginning of time. Same as with Moonstone, it has been around for thousands of years and is held sacred in India, China, Ancient Rome, and Middle Age Europe. Used by monks, meditators, and holy people in different parts of the globe, the mystical gem eradicated superficiality and other roots of materialism to aid spiritual people in their inner journeys.

As one of the most sacred stones in India, it was used by high priests and is only exhibited to be sold if it comes with a yellow cloth as yellow is also a sacred color. Moonstone is embedded in the forehead of the God of the moon, Ganesha. While in ancient Rome, the gem displays the image of the Roman goddess of the moon, Diana. It’s believed as the stone of gods and goddesses that can help destroy the ego for spiritual clarity.

According to Asian lore, the rarest blue moonstones are delivered by tides every 21 years. Some legends claim that it can give the power of prophecy by placing the stone in one’s mouth on a full moon. The gem healed insomnia and reconciled estranged couples in Europe during the Art Nouveau period and has thrived in the hippie era for its esoteric energies. Ever since, Moonstone has been feted worldwide for its divine radiance and healing powers.

Boho fashion has taken Moonstone under its wing. With pendants, bracelets, necklaces, and rings that parade the ethereal wonders of Moonstone, anyone can be captivated in a heartbeat. Matched with stunning silver and intricate carvings, the gem of the moon is one of the

most fascinating gems today. Witness the timeless magic of Moonstone by wearing it on a full moon.

Curious about how to find your favorite Moon Magic piece of jewelry?!