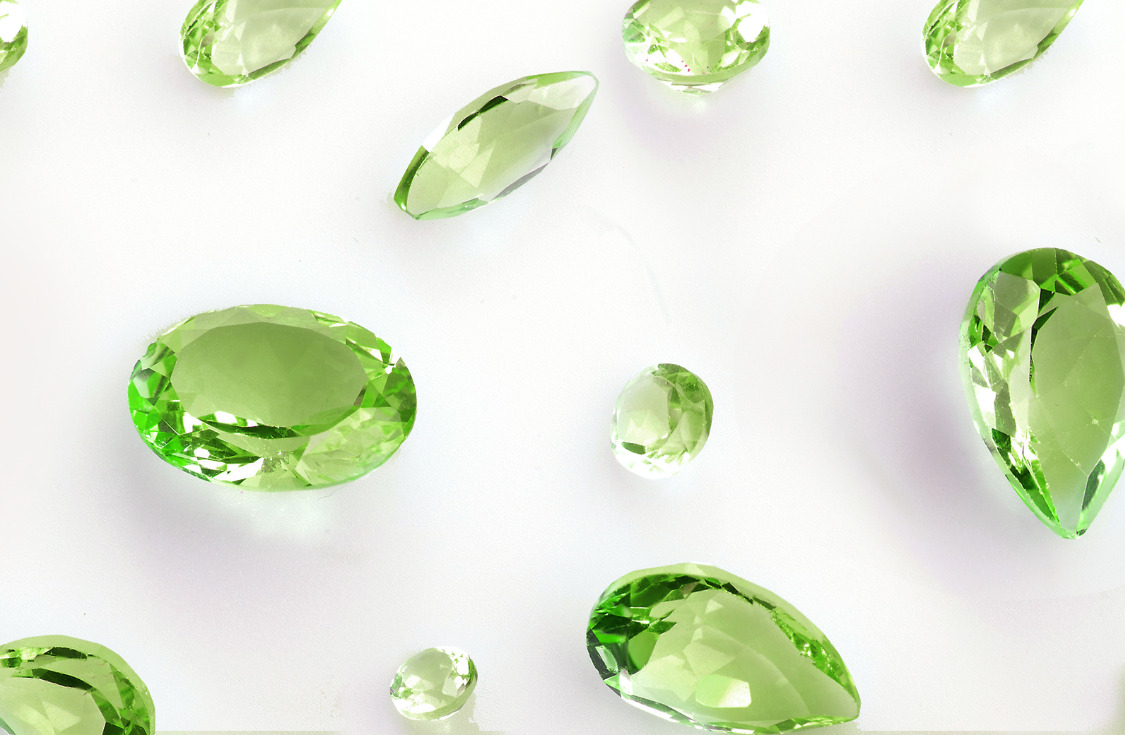 When we think of radiant green gemstones, the Emerald is the first to come to mind while the Peridot is pushed to the side. Not today. This beauty packs variety, makes waves with a 4,000+ year history, gleams with significant meaning, and will exude with an iconic presence in your life. Here’s everything you need to know:

Vividly bright and striking, the Peridot encapsulates the hearts of many who come across it with its effervescent shades of green. Unlike most allochromatic gemstones, this idiochromatic beauty’s color stems from its chemical composition.

Here’s everything you need to know about the shimmering green Peridot—from the history to the properties to the value of the stone—and more. Dive in.

What Is The Peridot?

The Peridot is the traditionally classic August birthstone and the gemstone that commemorates the 16th wedding anniversary. Due to their vibrant color in lowlight, they’ve also taken on the name and notoriety as the “evening Emeralds”.

The Peridot is acclaimed as the stone of compassion and believed to ring in good health, restful sleep, and peace to relationships. It’s also noted to balance the emotions and mind. Those who wear the Peridot are generally very happy and content people. It inspires eloquence and creativity while bringing delight and good cheer. Additionally, the Peridot stone is claimed to attract love, relieve anger, and bring a sense of renewal and rejuvenation to all things.

Besides channeling all the positive vibes, the Peridot is known to diminish obsession, decrease envy, and eliminate the feeling of guilt. Anyone who has this radiant green gemstone in their life will also be able to triumph in challenging situations and times.

Here is some information about the Peridot’s healing and metaphysical properties:

Where Is The Peridot Found?

In its essential mineral form, the Peridot is known as the Olivine and can be found all around the world. If this is your first time hearing the word Olivine, it’s common in lava, meteorites, ultra matic, and mafic rocks. The differential factor that gives it its official name is that rare high-grade sea of golden-green hues.

The Olivine presence with a dash of Peridot quality can be found in the USA, Mexico, and Hawaiian Islands. In the US, Arizona is one of the most frequented locations on the Native American San Carlos Apache Reservation. Another common area is the Kilbourne Hole in New Mexico.

Countries like Tanzania, Norway, Australia, and Egypt step it up on the Peridot quality front. However, the high-grade presence is found in southeast Asia. China and Pakistan have the strongest, high-quality Peridot stones.

“You have the right sort of stone. Peridot for mothers, Girasol for lovers, Sapphire for sadness, and Garnet for joy.”
- Catheryne M Valente -

What Are The Types Of Peridot?

Naturally, you’d think there’s just one type of Peridot. Since it’s so common around the world, this resulted in three distinct types. Let’s check them out:

The Changbai Peridot is named after its mining location in the Changbai Mountain Range in Northeast China and is known as some of the finest Peridot in the world. This extensive mountain range extends the border between China and North Korea. Peridots from this area are characterized by their gorgeously organic green deep hues and vibrant pops of lime. They’re also inclusion-free and their average size is approximately a carat.

Natural beauty reigns supreme in the landscape where these stones are mined. The area is characterized by its many lakes, rivers, and 2,000+m-high peak mountains. Interestingly, the largest peak within the Changbai Mountain.

If you’re looking for light and bright, look no further than the Pakistani Peridot. Shade-wise, this charming Peridot stone is usually an apple or lime green with distinctively subtle golden undertones. These stones are known to be well-faceted and polished for maximum beauty. The more striking it is, the better.

The Pakistani Peridot is mined in the Pakistan-administered area of Kashmir. This area is known for its high altitude and extreme weather conditions. That said, this stone can only be mined during the summer months. In stone years, this Pakistani stunner is a baby with its first discovery in 1994.

In its 27 youthful years, the pricing has been on-the-rise since 2005 due to its colorful variety. Unlike the predictable Changbai Peridot, the Pakistani Peridot has a carat size-range—which is rare when it comes to this type of stone.

There are two distinct qualities when it comes to the Hunan Peridot—its world-class clarity and non-bearing yellow tones. This Peridot variation is heralded for its openness of color. The Hunan Peridot originates from the southeastern province of China in the Hunan mining area.

When it comes to this Peridot stone, cutting is key. If cut correctly, it resembles brilliance similar to a Diamond. This brilliant beauty’s size is approximately a carat. The difference between the Hunan and Changbai Peridot is that the latter ranges slightly darker in tone.

Now that we know everything about the Peridot’s birthstone month, symbolic meaning, origins, physical properties, and varieties, let’s immerse ourselves in its extensive 4000+ year history.

The History Of The Peridot

The Peridot Stone is one of the oldest-known gemstones, and has been mined for thousands of years. Its original name—Chrysolite—is mentioned several times throughout the Bible. Chrysolite was taken from the Ancient Greek word ‘chrysolithos’, which means golden stone.

This also signifies the flashes of golden brilliance seen within the gem.

Origins of the Word ‘Peridot’

While the origins of the name aren’t 100% certain, there’s a possibility it stems from the French word ‘Faridat’ and ‘Paederot’.

History Throughout The Ages

The first stones of the Peridot were found on Topazo Island in the Egyptian Red Sea as early as 1500 B.C. There’s a legend that states the island inhabitants were required to collect the stones for the Pharaoh’s treasury. Due to the stone’s beautifully green glow, they were able to spot the Peridot at night. As a result, they called the Peridot stone the “gem of the sun”. Cleopatra’s radiant green jewelry was often described as Emeralds—but were more than likely Peridots. To this day, this radiant green beauty stands as the national gem of Egypt.

The name was officially coined in 1245—when the stone was left to St. Albans Abbey. In the Middle Ages, over 200 carats of Peridot were featured in the Three Holy Kings Shrine in the gothic Cologne Cathedral.

To no one’s surprise, the Peridot stone was often confused with Emeralds throughout the ages. The infamous Napoleon was known for adorning Josephine a Peridot jewel as a declaration of his love.

In the Victorian era, the English royal family took a keen interest in the August birthstone. Even more interesting, it wasn’t just the women—Queen Victoria’s son King Edward VII coined the gem as his personal talisman and channeled its protective properties.

Since 1912, the Peridot has been heralded as the official birthstone of August.

It’s also to no surprise that there’s global symbolism and folklore surrounding this enigmatic gemstone. Throughout time, the Peridot has long been associated with the sun and has always been the key to fighting darkness. Ancient Romans referred to the Peridot as the “evening Emerald” since its glow never diminishes and shines brightly under candlelight.

Another interesting legend noted throughout history is the Peridot’s powerful ability to ward off evil spirits. On the other hand, it’s rumored to aid the success of personal relationships and marriage. This is because it encourages positive energy and suppresses the ego and jealousy.

In Hawaii, the Peridot represents the tears of Hele who is the goddess of fire and volcanoes.

How Much Is The Peridot Worth?

In general, the Peridot price ranges approximately $50-$80 USD for the average size of 1 carat. The finest quality, top-color Peridots that are larger than 1 carat range steeper in price at $400-$450 USD.

“The aesthetes of Des Esseintes’ generation found Diamonds common, Rubies and Emeralds depreciated, and Turquoise vulgar. The old poetry was dead, though echoes of it lived on in the names of such gems as Chrysoberyl and Peridot and Olivines and Almandines and Cymophanes and Aquamarines. Beauty which has departed from things may live on in words.”
- Joan Evans -

How To Care For The Peridot

We all know caring for your jewelry is imperative—and that includes cleaning those statement jewelry pieces. Like other gemstones, it’s important to keep your Peridot jewelry away from your other gemstones. Why? More durable gemstones—like Emerald, Ruby, Sapphire, and Diamond—will scratch the Peridot if they’re paired together.

How To Clean Peridot Jewelry

The best way to clean Peridot jewelry is with warm soap and water. Dip a lint-free, soft, non-abrasive cloth or jewellery cloth in a warm water and soap combination. Gently rub your piece and then rinse with another cloth dipped in plain water. Once washed, carefully dry and place it in a jewelry box wrapped in a soft cloth.

Throughout time, one of these gemstones was often mistaken for the other. Although there’s similarities, there’s different shades of green. When it comes to color, the Emeralds or a more vivid and deep hues while the Peridot is a lighter to more olive shade of green.

As mentioned above, the Peridot is the official birthstone of August. On the other hand, the Emerald is the birthstone of May and the stone of the Cancer Zodiac Sign.

Emeralds had been traded as early as 4000 BC while the Peridot was mined in 1500 BC. Additionally, the Emerald is often associated with Ireland due to its rich green shades and is also meant to open the heart. The Peridot has a stronghold in the Egyptian culture and Ancient Egyptian history.

When looking for larger and higher quality gemstones, the Emerald is especially rare. Overall, the Emerald is an extremely valuable stone due to its rarity, historical significance, and beauty. Based on the 4 C’s, some Emerald’s price range can ramp up to approximately $6100 USD per carat and usually range higher in prices than Diamonds. Since its value is incredibly high, it’s no surprise that they’re set in highly valuable metals such as yellow gold.

To the contrary, the Peridot is found globally and considered a semi-precious stone. Although the highest quality is still hard to find, it’s still more common than the Emerald. Due to its commonality, you can buy a nice Peridot price carat for under $100 USD. Metal-wise, they’re usually set in lower carat metals like sterling silver or vermeil.

We hope you’ve gained some major knowledge on this effervescent green gemstone. Of course, the Peridot is not the only authentic gemstone we offer. View the entire collection of Moon Magic Jewelry.