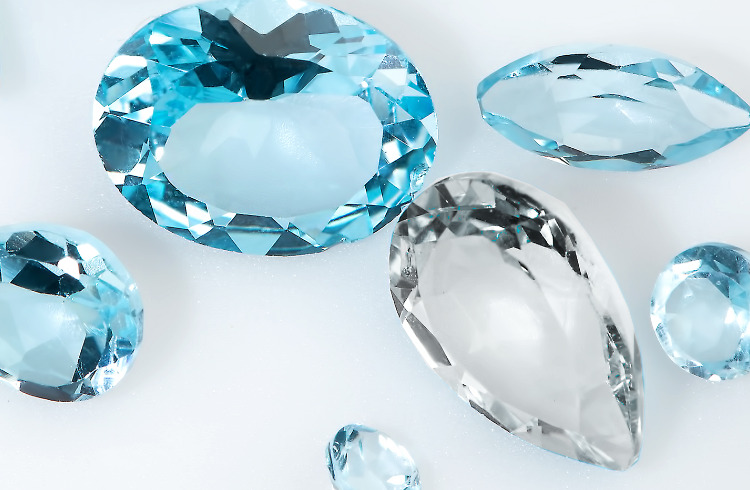 The Topaz is a vivacious and multidimensional gemstone packed with significance, rich in history, and loaded with healing powers. We’re highlighting everything you need to know about this iridescently durable beauty. Read up on the Topaz meaning.

Everything You Need To Know About The Blue & White Topaz Gemstones

When browsing through rings—whether it’s Moon Magic’s Jewelry or Pinterest— it’s easy to get lost in the beautifully iridescent sea of blue and white. When you look to see what type of glistening stone it is, you discover it’s a Topaz. The next question that pops into your mind is, “What is the Topaz gemstones meaning?”

If you’re anything like us, you’d love to know the ins-and-outs of these variegated beauties. That’s why we’ve packaged up everything you need to know about the Topaz stones' meaning, Topaz colors, and so much more—keep reading.

What Does ‘Topaz’ Mean?

Besides being one of the official birthstones of November and a well-known favorite for colored gemstones, the Topaz is a rare silicate mineral. Its composition is Al2SiO4(F,OH)2 and it ranks number eight on the Mohs Hardness Scale. Additionally, the Topaz is known as the celebratory gemstone of the 16th wedding anniversary.

This vivacious blue gemstone is known as the stone of clarity. The Blue Topaz meaning allows you to channel your inner wisdom and find the perfect pathways to successful opportunities. Anyone who wears this gemstone should embrace their authentic self, trust their power, and revel in good fortune.

“Blue Topaz represents loyalty and righteousness, is associated with true love, which is clear-sighted, trust, relationships, and communication.”
- Tiffany -

What’s The History Of The Topaz?

Now that you’re well-versed on the meaning of the Blue and White Topaz, it’s time to dive into the history of the Topaz.

In mythology, the Topaz is portrayed as the healing and peace gemstone. Its origins started with the Romans over two thousand years ago on the Topazios Island in the Red Sea. They believed anyone spotting this gemstone would give them strength on life’s daily adventures, protect them from enemies, and bring reconciliation. They also believed that if they held this superior stone near poisoned food or drink, it’d change colors.

Similarly, this stone was worshipped in old Egypt and the Topaz stone meaning yielded supernatural powers from the sun god, Ra. South American cultures also heralded the Topaz as the stone that could alleviate sickness during the full moon.

During the Renaissance, people believed the Topaz could break magic spells and help rid one of anger. In India, it was well-known that those who wore the Topaz above the heart would be guaranteed a long life, beauty, and intelligence.

The 18th century gold rush resulted in Brazilian Topaz becoming extremely popular among European aristocracy. Notable pieces of jewelry from this era include the Braganza Topaz in the Protugese Royal Crown, which was meant to symbolize the sovereign’s wealth and power. During this time, the Swedish Royal Family also partook with the Parure Necklace of Maria Pavlovna.

Nineteenth century Russians coined the term for Imperial Topaz and restricted ownership of this rare find to the royal family. The Ural Mountains were the leading Topaz source and the pink gemstone mined was meant to commemorate the Russian Czar.

In most recent years, the Duchess of Cambridge—Kate Middleton—is known for wearing Blue Topaz and Diamond Drop Earrings for social events. In addition, Hollywood is notorious for its fondness of the blue stunner—with celebrities such as Taylor Swift, Jennifer Lopez, and Cate Blanchett donning it at red carpet events.

The Topaz is amazing for releasing your inner creative. 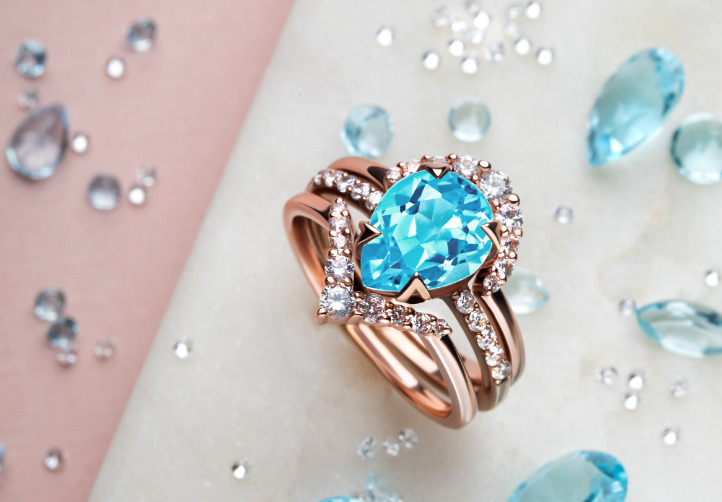 The Topaz is known for its soothing and calming effects. Wearing this stone will help you have the confidence to rise to any occasion your heart desires. 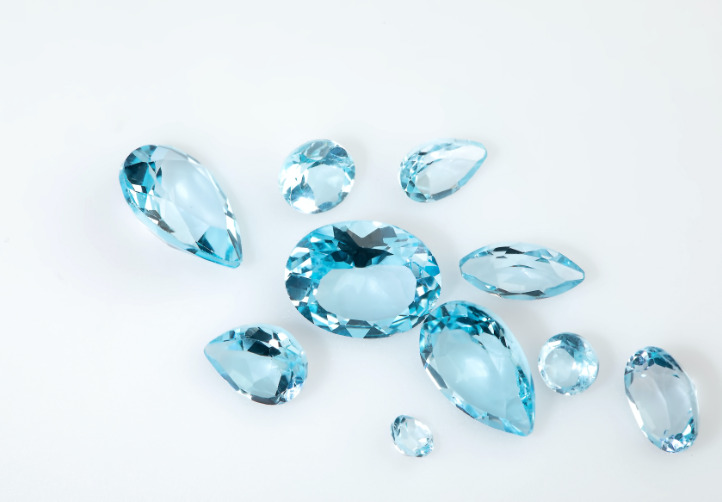 Anyone wearing the Topaz is on the path to good health and fortune. 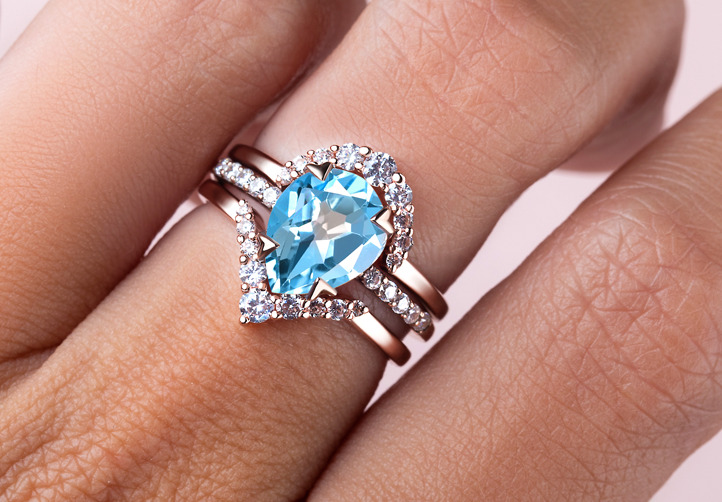 What Are The Other Shades Of Topaz?

The Topaz is usually known for its most natural colorless hue and shades of blue. However, the Topaz colors span the rainbow and also include yellow, orange, pink, violet, brown, and red.

The variety of colored Topaz are a result of defects within the crystal structure. Based on the natural impurities, the Topaz is classified into the following types:

The Sherry Topaz’s hues range from brownish-yellow to yellow-ish brown and even orange. This variety of fascinating colors makes it a precious topaz and distinguishes it from citrines and smoky quartzes.

Yellow Topaz skews less expensive due to its commonality. This beauty ranges from bright yellow to orange-hues.

Ranging in yellow, orange, and reddish shades, the Imperial Topaz is one of the most expensive varieties. Its striking color makes it highly sought after around the globe.

This brown shaded gemstone  is another widely available and common topaz variety. Interestingly, this type is often mistaken for a smoky quartz due to their similar hues.

The White Topaz is the colorless and most natural variety of gem. It’s easily available and often a more price efficient option that has similar brilliance to a diamond. Another similar hue is the Silver Topaz.

Fun Fact—White Topaz is a perfect option to top of any engagement ring. View our collection of White Topaz Jewelry.

Blue Topaz has become the most preferred, swoon-worthy type. Natural Blue Topaz is extremely rare to find and usually very pale in color. As a result, this beauty is heat treated and irradiated to produce the vibrant hues most often seen in today’s market.

There are three types of vibrant Topaz.

What Are The Benefits Of Topaz?

The Topaz has been heralded as a stone with vast healing properties. Besides the folklore of protecting from enemies and saving one from food poisoning, here’s some of the physical, mental, and metaphysical benefits.

Blue Topaz is renowned for its contribution to good health. It's an incredible alleviator with all issues related to the throat and head. This blue beauty instantly shifts migraine pressure, acts as a gentle stress reliever for jaw clenching, and soothes sore throat.

If you have a fear of public speaking, the Blue Topaz is a perfect match. Add this gem to your all-star jewelry ensemble to start rocking the confidence and amplify your voice.

On the other hand, the White Topaz is the perfect pick-me-up for those in-need of an extra energy boost and also helps with relieving migraines. Additionally, the White Topaz crystal is known to strengthen your hair and nails and heal any skin irritations.

Regardless of the shade, the Topaz is well-known for balancing you out and preventing you from feeling overwhelmed. How? It repurposes that negative energy to positivity and reminds you that you’re worth it, you’re wonderful, and your voice matters.

For the writers out there, the Blue Topaz can help you finetune your focus and get into the writer’s zone. This newfound focus along with communicating authentically empower you to live your best life and find your niche within the world. Properly communicating your needs and maintaining a clear mind helps with decision-making skills and paves the road for the life you’ve always dreamed of.

In parallel, the White Topaz brings out your individuality and impacts others with your presence.

The most important connection bridged with the Topaz is vocalizing your boundaries. Not only does this make us feel safe, it helps us connect with what matters most. The way the Blue Topaz does this is with the throat chakra.

Conversely, the White Topaz aids in synchronizing your thoughts and ideas with the divine realm. As a result, this better aligns you with your designated life path. Additionally, it helps you efficiently and fluidly reach your goals. Anyone who wears the White Topaz will proudly tout inner peace to your mind and soul.

How Do I Use The Topaz?

One of the best ways to take advantage of the White Topaz meaning is to meditate daily. This will allow you to keep your soul and energy in sync while dispelling any fears. Meditating with the White Topaz will also ground you in much-needed clarity.

Where Are Topaz Found?

Topaz is found worldwide with Brazil being the world’s most vital source of these gemstones. The most sought-after Imperial Topaz is produced in the Minas and Gerais southeastern states, while the Ouro Preto and Capao mines produce many of the yellow, orange, pink, red, and violet Topaz. Additionally, Brazil is a leader in producing the colorless Topaz—which is often heat treated and irradiated to produce the artificial versions of Blue Topaz.

The Topaz meaning is endless, making it a worthwhile gemstone to invest in with a wealth of benefit. Of course, this isn’t the only gemstone we have—browse the rest of our jewelry here.

“Whenever you touch a Topaz, it touches you. It awakens a gentle fire, like wine awakens in grapes. Still unborn, clear wine seeks channels amidst stone, demands words, bestows its secret nourishment, shares out the kiss of human skin. The touch of stone and man in serene peace kindles garlands of fleeting flowers, which then returns to primary sources: flesh and stone: contrary elements.”
- Pablo Neruda -

Say Hello To The Other November Birthstone—The Citrine

Besides the Topaz, the Citrine is the other official November birthstone. This enigmatic beauty is known as the stone of happiness, joy, abundance, and personal will.

If you’re into ‘manifesting,’ then look no further. By simply wearing this stone, many say that it will lift your spirits and help you successfully achieve your goals. This is why women all over the world love to wear Citrine jewelry. It’s also recommended that you keep a Citrine in the money-making corner of your home or business in a “cash box”—and let those powers come into play.

Throughout history, Citrines were heralded for their striking beauty and brilliance. This birthstone for November also symbolized the warm, bright sun and the vitality of life. The November birthstone’s color includes vivid yellow shades and multi-dimensional clarity—which represents a healthy body and mind.

Interestingly, the Citrine ignites energy in your body, which can reverse degenerative diseases and promote chemical balances. It also stimulates digestion, negates kidney and bladder infections, improves blood circulation, and detoxifies your body.

Another fun fact about the other November birthstone, Citrine, is that it awakens creativity and imagination. Similar to the Topaz, artists and creatives alike hold this stone close.