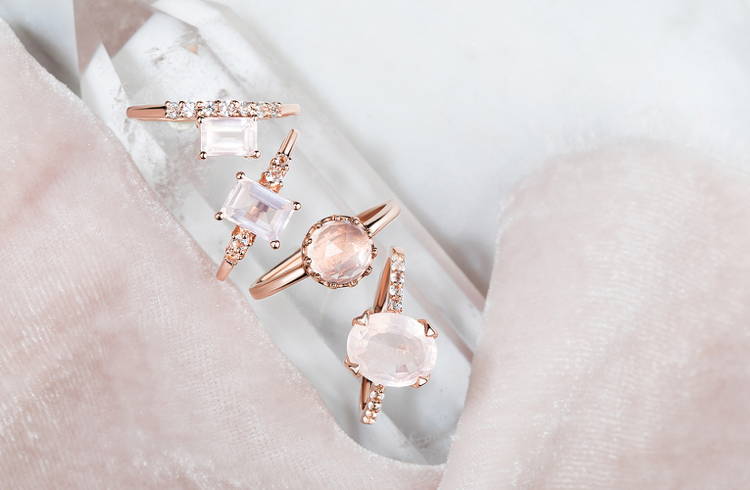 While it is considered a minor gemstone, it is not only popular among people who value rose quartz properties as soothing but it also appeals to many because of its subtle pink hue. The color is so pleasant that in 2016, Pantone selected it as their Color of the Year.

Since it is not uncommon to find relatively large pieces of rose quartz, it is often used to create figurines, ornaments, and of course, jewelry.

The amazing rose quartz properties led to it being known as the Heart Stone or the Love Stone.

What Is Rose Quartz?

Like other types of quartz, most rose quartz is formed through the process of magma crystallization, making magmatic pegmatites the primary source of larger rose quartz crystals. However, this is not the only possible method of formation, as this mineral can also be found in hydrothermal veins.

It is believed that the stone owes its beautiful color to the presence of manganese, iron, and titanium, but other research suggests that the specific coloration is caused by delicate fibers of borosilicate which has since been dubbed dididumortierite.

To avoid confusion, it is also necessary to mention the existence of pink quartz, which often forms in smaller crystals, and which seems to owe its color to aluminum and phosphates. Also known as crystalline rose quartz, this variety is somewhat rarer, and characterized by greater clarity.

Ranging from barely perceptible rosy coloration to deep, rich pink, rose quartz is usually at least somewhat hazy, although translucent and transparent stones are not exactly a rarity. While it is difficult to find larger pieces of enviable clarity, smaller ones are relatively abundant.

The oldest recorded pieces of jewelry containing these stones were beads found in present-day Iraq. They are believed to be a remnant of the Mesopotamian culture and have been dated all the way back to 7000 BC.

The Assyrians seem to be the next culture to prominently feature this stone in their craftsmanship, and they are probably responsible for the fact that the stone later became highly valued among Romans, Greeks, and Egyptians. The stone was ascribed with magical properties by these cultures, with some even believing it could counteract the effects of aging.

Despite the fact that it is relatively easy to synthesize rose quartz, the stone is so accessible and cheap that synthesizing it simply doesn’t make sense, meaning that you are highly unlikely to come across a piece of fake rose quartz.

This stone can be found all over the world, with major deposits being in Madagascar, India, South Africa, and Brazil.

Associated with the astrological signs of Taurus and Libra, rose quartz is a beautiful and meaningful gift for any sign. 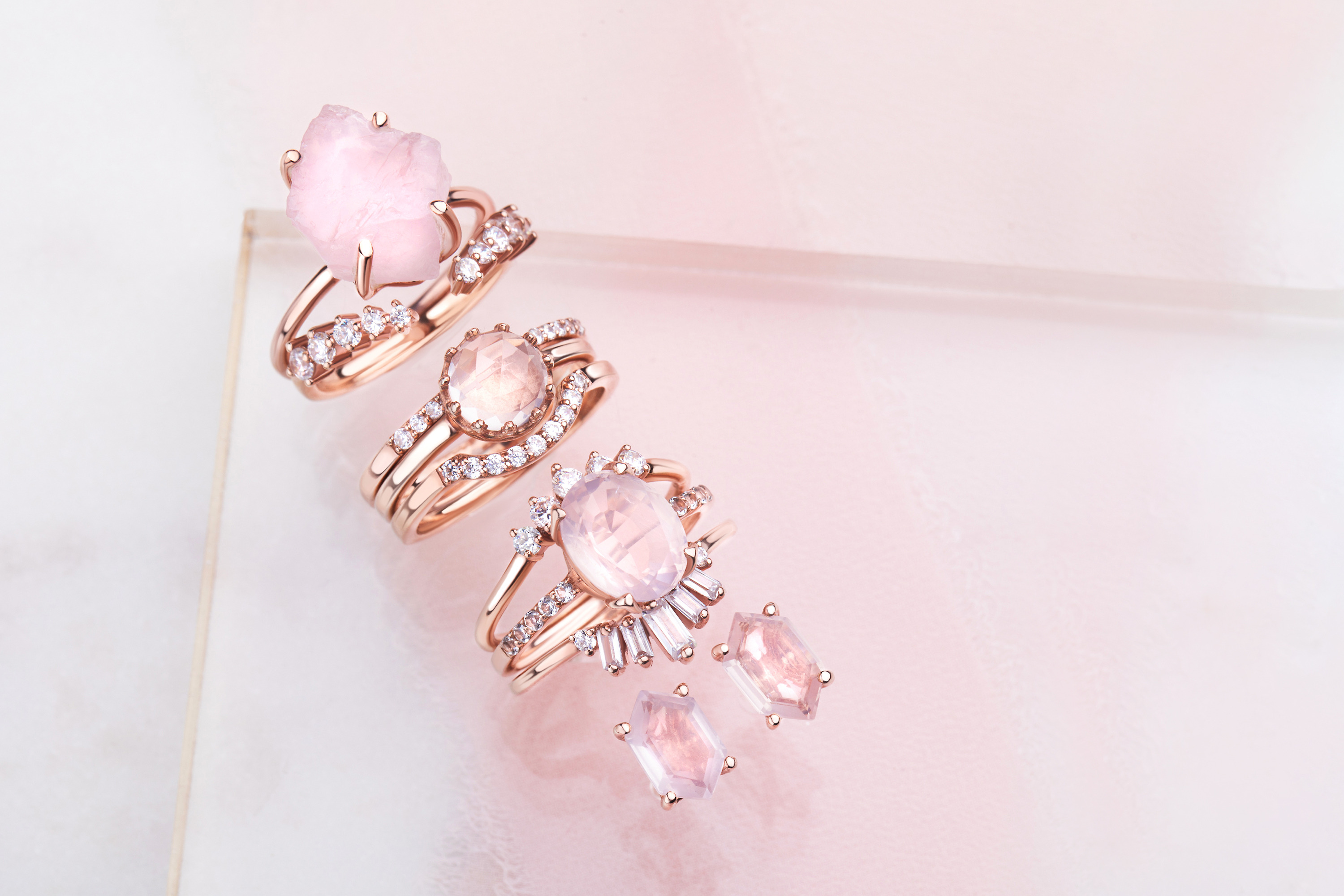 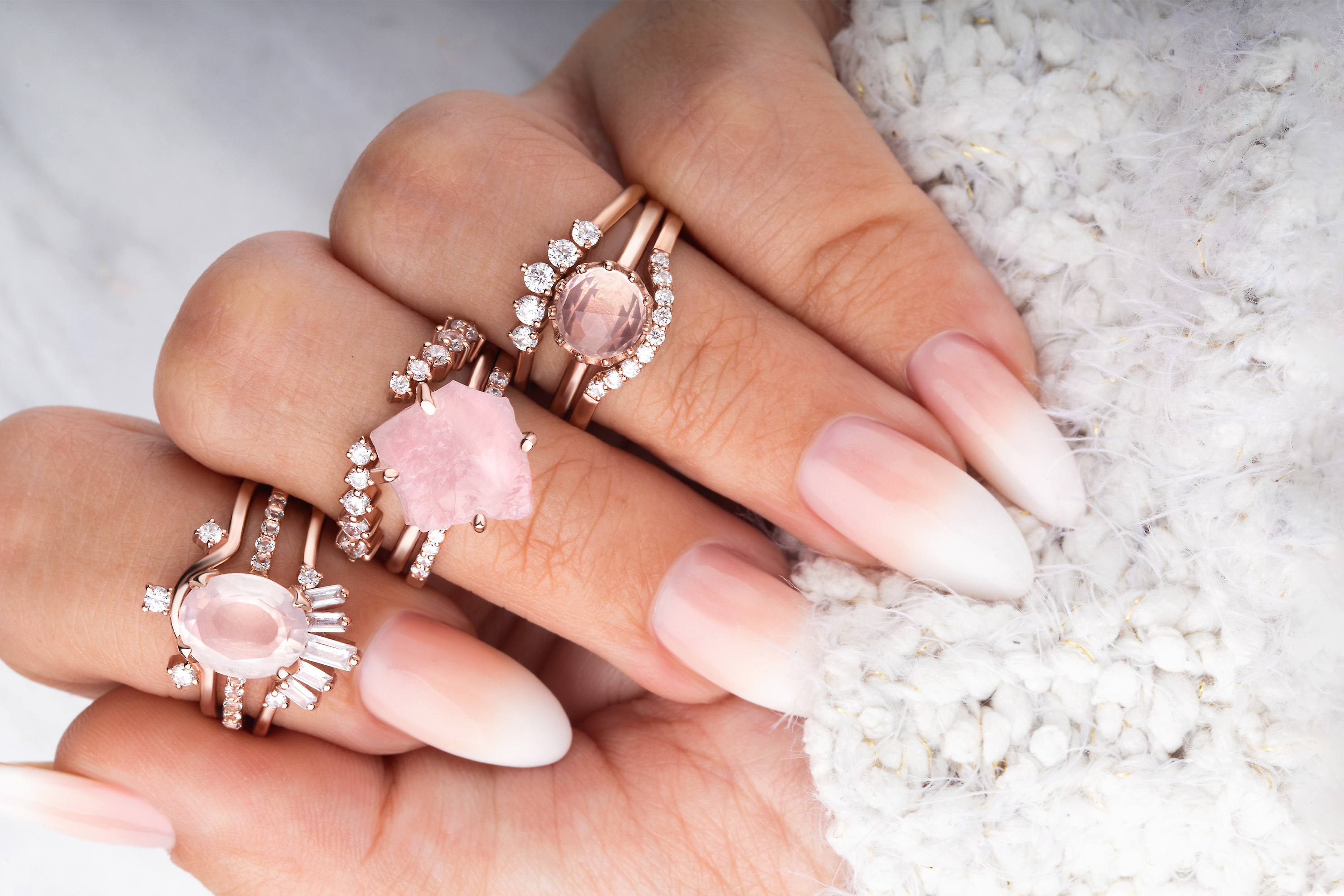 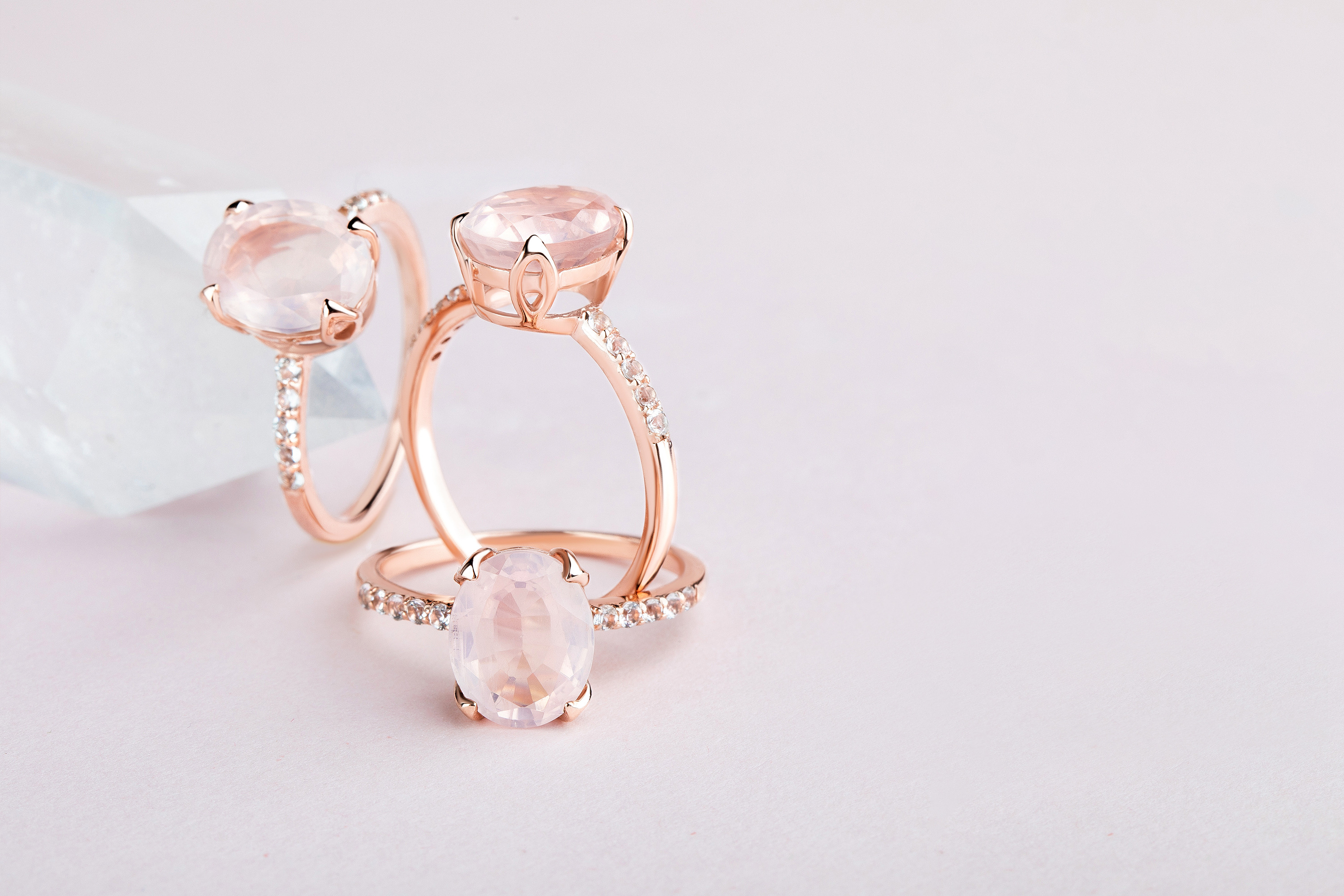 Treat yourself to a timeless rose quartz ring or gift it to someone who could use more balance and harmony in their life. 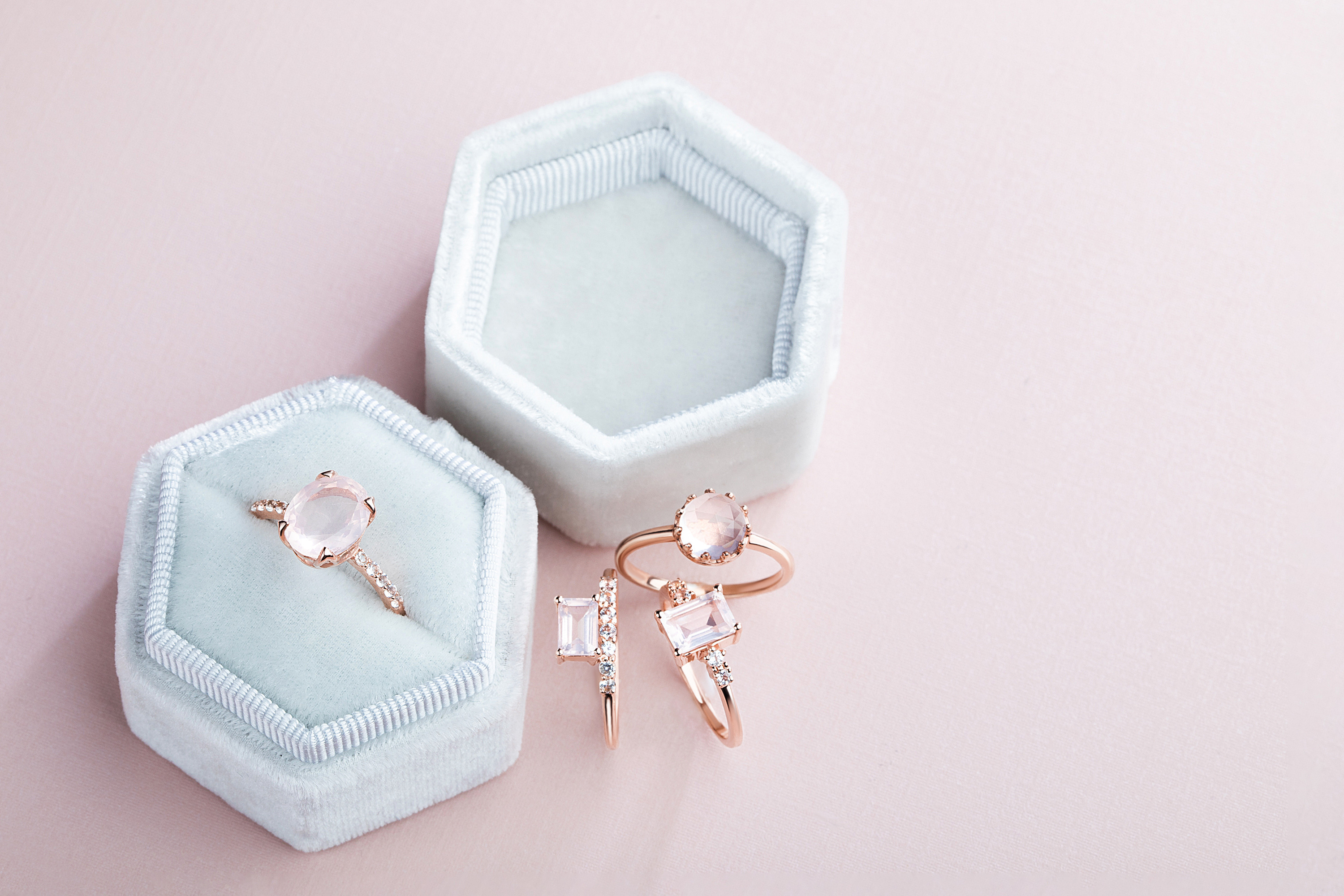 Whether you practice crystal meditation, or simply own electronics that are made with quartz, there’s no denying the humble stone’s power. Clear quartz crystal generates a measurable electric charge, and is used in televisions and radios. Its blushing cousin, rose quartz is often used in massage therapy, reflexology, and energy medicine in the form of a wand or polished stone. Rose quartz meaning varies throughout cultures, but the soft pink stone is often tied to gentleness, love, and fertility. In reiki and energy work, rose quartz properties are engaged to reset the heart chakra, release stress, and promote circulation and skin health.

Rose quartz meaning varies throughout cultures, but the soft pink stone is often tied to gentleness, love, and fertility.

Its abundance and the fact that it can come in rather large formations makes rose quartz a rather versatile stone in terms of the cuts you can choose from.

We’ve already mentioned figurines and other ornaments, but you can also often find rose quartz in the form of polished tumbled stones, often accompanied by other minor gemstones like aquamarine.

While it was often used for beads, rose quartz properties really get to shine when it is cut into cabochons. Aside from the harmonious smoothness of the shape, what makes these stones impressive is that only the rose quartz that is cut this way has a chance of displaying asterism, i.e. the appearance of a star with six rays caused by the refraction of the light against a delicate network of inclusions in the stone.

While it can be faceted, that is mostly reserved for the rarer, pink quartz, as rose quartz is translucent rather than transparent, and as such simply fails to provide enough contrasts with the skin or the jewelry setting.

Finally, as well-known rose quartz meaning is that of a love stone, it is no wonder that rose quartz is often cut into a so-called puffed hearts. Aside from the symbolic value, this shape is popular simply because it is rather easy to cut and convenient for setting into pendants.

Rose quartz has a hardness of 7 on the Mohs scale, making it more than sturdy enough to be set in different kinds of jewelry. Even though its accessibility makes it popular in crafts jewelry, it also has its admirers among designer jewelers.

Since the stone is believed to be related to different kinds of love, rose quartz jewelry often sports other gemstones as well. These stones are thought to be able to enhance or direct the power of rose quartz. For instance, when paired with selenite, it is believed to have a beneficial effect on your spiritual development and personal growth; when combined with ammolite, it might help you find your true love, etc.

When it comes to maintenance, you should be aware that rose quartz is relatively soft when compared to some of the other gemstones. This means that it is relatively prone to scratches, which is why you should never keep it in your jewelry box with other stones, especially not harder ones like diamonds or sapphires. You should also take care not to bump it against hard surfaces, which is why the stone is not really seen as often in rings as it is in other jewelry that is somewhat less exposed to this risk.

While pink quartz has been found to be photosensitive, meaning that you shouldn’t expose it to too much sunlight unless you want the stone to start gradually losing its color, rose quartz doesn’t have this problem.

When cleaning your rose quartz, you should stay away from jewelry cleaners and detergents and instead simply use warm water with mild soap.

Rose quartz is a beautiful, if rather common, gemstone boasting gentle shades of pink.

Most commonly found as puffed hearts, tumbled stones or cut en cabochon, it has been prized by various cultures and believed to have substantial magical powers.

Today, it is commonly found in different kinds of jewelry and continues to fascinate people with its subtle beauty.