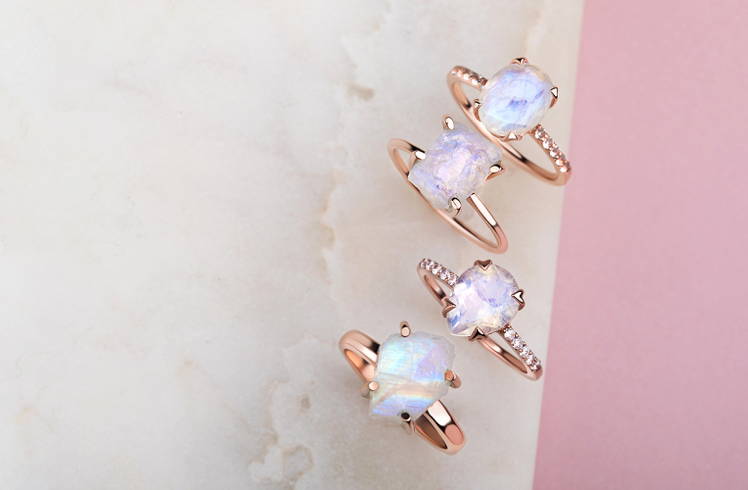 From sacred sites in India and Ceylon to modern-day gemstone jewelry, rainbow moonstones are rich with mysticism, mystery, and meaning.

If you fancy yourself an eclectic in search of crystals and gemstones to deepen your meditative practice, or seek balance and good luck in tumultuous times, rainbow moonstones may be a divine fit.

To understand rainbow moonstone meaning, it helps to look at the past. Folklore - though sometimes fanciful – can offer a look into the values of previous generations and lend insights into human nature. Through metaphysics, historic texts, and the oral tradition, the power and importance of gemstones in society is carried on. Whether you gravitate to them for aesthetic reasons or feel a deeper connection, ultimately, the meaning of gems and minerals in your life is entirely up to you.

The Sky in a Stone: Lunar Energy and Ethereal Vibes

Like many origin stories of precious objects, ancient tales surrounding moonstone jewelry begin with a link to the natural world. “Moonstone was believed to contain an image of the moon, which grew clear upon days and occasions fortunate to its owner, and dim with the reverse. It was thought to wax and wane with the moon and was a cure for epilepsy,” writes geologist and gemstone historian Oliver C. Farrington in Gems and Gem Minerals. “Some of the other traditional virtues of gems ascribed chiefly in the Middle Ages, but many doubtless have earlier origin,” he continues.

Also writing of moonstone’s role in Medieval Europe, Michael R. Collings points to moonstones as an ancient source of reconciliation between lovers, a cure for insomnia, and a spiritual intensifier. In his book GemLore, Collings notes the connection of moonstone to goddess worship and white witchcraft, and suggests it was used to “protect the wearer from evil magic.”

To similar effect, George H. Bratley writes of the meaning of moonstone in his 1907 book The Power of Gems and Charms. He suggests moonstone “protects from harm and danger,” is “cooling in fever if applied to both temples,” and brings “good fortune in love matters.”

“The moonstone, called by the Easterns, chandra-kanta,” Bratley writes, “Is said to be formed and developed under the moon’s rays, this giving it occult and magical power.” Also a woman’s name and series of popular novels in India, the word chandrakanta translates to moon desired, moon loved, or wife of the moon.

Inspired by Nature: Other Cosmic Minerals

The resemblance of gemstones to heavenly bodies give us easy to spot associations like sunstone, rainbow moonstone, and cloudy quartz. But an understanding of Greek and Latin roots can give us a deeper look into meaning behind the different types of minerals that go by lunar names.

Selenite, a translucent crystal that’s part of the gypsum family, has deep ties to the words moon and stone. “Selenite derives its name from its soft lustre, suggestive of moonshine,” writes Edwin W. Streeter in Precious Stones and Gems: Their History, Sources and Characteristics. “But though the word literally signifies ‘moonstone,’ no jeweller would think of designating it by such a term,” he continues, “the word ‘moonstone’ being invariably applied to an entirely different stone.”

Unlike moonstone and rainbow moonstone, selenite has no connection to the feldspar group. It’s easy to see how selenite’s milky sheen calls moonlight to mind, and that various cultures may have bestowed the words moon and stone unto more than one gem. “The Greeks called it Aphroselene, which signifies the splendour of the moon, or a beam of the moon, whilst the Romans called it Lunaris,” writes Streeter. “Whatever the moonstone of the Ancients may have been, the moonstone of the present day is an opalescent variety of orthoclase-feldspar termed Adularia.”

Much like play of color in precious opal, the dynamic shine of labradorite and moonstone is created by their internal composition. The layers of material within the stone create a grid that refracts and diffuses light as it enters. The result is a flash of lunar whites and blues, and in the case of rainbow moonstone and labradorite, a full prism of color.

Adularescence, a term used by geologists to describe this enigmatic, billowy sheen, traces its origin back to the Swiss Alps. Some of Europe’s early sources of moonstone came from the Adular or Adula Massif (near present day Rheinwaldhorn), and lent the optical effect its mountainous name. Today, adularescence is almost exclusively used in reference to members of the feldspar family which include labradorite, rainbow moonstone, adularia, and orthoclase moonstone.

How to Tell the Difference: Rainbow Moonstone vs Moonstone

There are two major varieties of moonstone. The orthoclase variety, often milky white or tan with a periwinkle blue sheen, is the most common type of moonstone. The rarer rainbow moonstone - actually a type of labradorite - is gaining popularity for its prismatic adularescence and light body color.

According to the Gemological Institute of America (GIA), “Rainbow moonstone is transparent labradorite, a closely related feldspar mineral with sheen in a variety of iridescent colors. Although it’s technically not moonstone, it’s similar enough that the trade has accepted it as a gem in its own right.”

“To be called moonstone, a mineral’s actual identity is not as important as the beauty of its adularescence,” they note. “Today some people prefer it to traditional moonstone.”

“legends say that moonstone brings good luck. many believed that you could see the future if you held a moonstone in your mouth during a full moon.”
- gemological institute of america (gia) -

At Moon Magic, we’re passionate about gemstones and the rich stories behind them. We love history and mythology, and we also believe in creating your own. Each generation and each individual is bound to find their own connection to rainbow moonstones and other precious gems.

We invite you to explore our collection of rainbow moonstone jewelry, and tell us how crystals and gemstones inspire you.