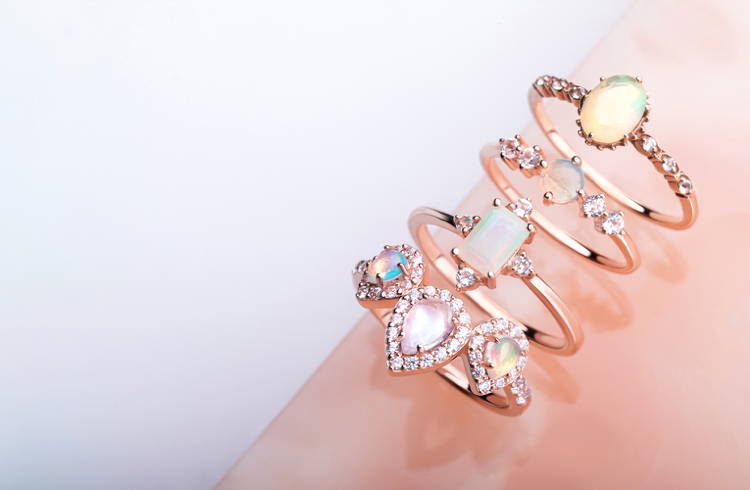 Beautiful, plentiful, and more durable than many of its counterparts, Ethiopian opal is both one of the newest and oldest types of opal known to mankind.

It’s a bit of a paradox, no doubt. Ethipian opal is both very new to modern opal jewelry markets, and potentially, the first source of the flashy gem known to the ancient world. First discovered, or shall we say rediscovered, in the 1990s, opal is found in the steep volcanic cliffs that border the Great Rift Valley.

Located on hard to access, high elevation plateaus that can reach 10,000 ft (+3000 m), Ethiopain opal mines are worked today much as they might have been historically. Each day, miners traverse the precarious cliff faces on foot to reach the dig sites, and do most of their exploring with traditional hand tools. They often work as a co-op with their fellow opal hunters to share in the work and the success of a great find. From these humble beginnings, come some of our era’s most significant and actively traded opal gemstones.

While the Ethiopian opal boom seems relatively new, archeology shows that opals may have played a part in East African trade as early as 4000 B.C. A 1939 discovery by archeologist Louis Leakey places opals in the hands of humans in Kenya nearly 6000 years before contemporary Ethiopian opal discoveries. While very few sources of African opal were known at the time of his research, modern scholars suggest that the material Dr. Leaky uncovered in the Kenyan cave most likely made its way from neighboring Ethiopia.

There are several significant mining districts in Ethiopia, each with their own distinctive colors and types of stone. Regional boundaries have been shaken up by governmental restructuring over the years, and many stones still bear the original names of towns and provinces where they are found.

The first big wave of Ethiopian opal to hit gem markets began in the 1990s, sourced from what was then called Shewa Province. Yita Ridge, a mining area in the now defunct province, produced gems ranging from transparent pale yellows to rich chocolatey browns. In a phenomenon called contra luz, many transparent opals from the Shewa area reveal their prismatic play of color when lit from behind instead of above. Sometimes known as Menz Gishe, Shewa, or Mezezo opals, these delicate beauties are mined about 150 miles (240 km) northeast of Ethiopia’s capital city, Addis Ababa.

Called a “promising new deposit” by the GIA magazine Gems & Geology, a 2008 discovery near the village of Wegel Tena almost immediately reshaped the global opal trade. Taking their name from the one time Wollo Province, Welo opals soon became a powerhouse to rival Australia in terms of quality and production.

Five years later, another find to the north further bolstered the importance of Ethiopia as an opal source. These impressive, approachably priced opals have created worldwide buzz and inspired a new generation of fans of the October birthstone.

Taking the throne from Australia, Ethiopia is known as the modern opal capital of the world.

Ethiopia’s most important opal deposits are found in a region called Tsehay Mewcha, a rocky, volcanic plateau at the headwaters of the Blue Nile. The gems found here are known by several spellings at international markets - most commonly Welo, Wollo, and Wolo. Like gemstones from Shewa Province, Welo opals may also take on geographical names that predate the country’s new constitution (and subsequent name changes) in the mid 1990s. The term Welo is easily tied to the Wollo Province, though the area’s gems may also be associated with names like Delanta (a sub-region of Wollo) and Wegel Tena (a nearby village).

While sorting out the names and origins of Ethiopian opals can be a little tricky, identifying their unique colors and patterns can be far more fun. Ethiopian Welo opal is frequently found in the warm yellows and oranges of fire opal, in milky whites, and an almost clear state known as crystal opal. Common opal varieties are also sourced from Ethiopia, but its rich supply of precious, or play of color opals, has earned it the current title as the opal capital of the world.

Australia has long been the epicenter of the opal industry, fueled by early opal rushes in the Victorian era and later discoveries in the 20th century. Sometimes called fire of the desert, Australia’s national gemstone has a stellar reputation.

“With an over 100-year track record, Australian opals set the benchmark for the trade, a standard by which opals from all other sources are judged,” writes Jeffery Bergman in the Spring 2016 issue of InColor magazine. The author points out that despite a significant head start, Ethiopian opals are on their way to overtaking Australia in terms production.

The amount of Ethiopian opal on the market “dwarfs what is currently available from Australia,” writes Bergman. “In fact, Ethiopia may now have overtaken Australia as the world leader in opal production.” The availability and relative affordability of Ethiopian Welo opal has opened up opportunities for younger collectors and opal jewelry enthusiasts to partake in the trend. Though Ethiopian opals are generally less expensive than gems from Australia, Bergman notes that “Rare and truly exceptional pieces can sport Australian level price tags.”

Another factor that sets Ethiopian opal apart from Australian gems is its ability to change states in water. “The opaque-to-translucent opals from Wegel Tena become transparent when soaked in water (hydrophane), are resistant to crazing, and are remarkably durable,” a Gems & Geology feature highlights in the Summer 2010 issue. This intriguing hydrophane property can mean vulnerability in other varieties of opal, but makes Welo opal even more fascinating.

Many types of opals have characteristics that make them recognizable, and Ethiopian opals have some of the most distinctive markings of any regional source. Awe inspiring specimens feature areas of common opal intermixed with precious opal. This type of composition can create patterns that look like snakeskin, leopard spots, or elongated columns known as digits.

A rare and even more intriguing combination is found in Ethiopian opals with play of color and chatoyancy, a cat’s eye effect formed by inclusions of other minerals. The flame-like markings inside the stone can resemble a vintage glass marble on one side, and exhibit a vibrant play of color on the other.

A beautiful striped opal specimen from Wegel Tena offers a peek into the area’s geology and the many types of Welo opal. Striking bands called zoning indicate a layered formation, while interspersed colors of precious and common opal represent several of the opal varieties found in the region. While these unique types of opal can be found in Ethiopia, they are incredibly rare.

The majority of precious Welo opal is light yellow, white, or translucent - body colors that showcase a vibrant rainbow effect created by the interplay of light. Whether you’re interested in the rarest types of opal, or simply want to add the classic kaleidoscopic stone to your jewelry collection, Ethiopian opal is making it more accessible than ever.

A Gem of Kings and Queens: The Meaning of Opal in Africa

Little is known of the role opals played in the lives of early man. What we do know, based on Dr. Leakey’s discovery of opal artifacts near Nakuru, Kenya, is that opals were significant enough to collect and trade over long distances.

The Queen of Sheba, a figure in the Hebrew bible and countless regional tales, was said to have brought opals to Jerusalem on her visit to King Solomon. A description of her entourage in the book of Kings details “a very great train, with camels bearing spices, and very much gold, and precious stones.” Her homeland, thought by many to be present day Yemen, would have positioned the queen closer by sea to today’s Ethiopian mines than to Jerusalem by land. While the origin of her treasure is unconfirmed, it’s quite possible that Ethiopian opals were traded across the Red Sea and accompanied the queen on her fabled journey.

“It is in 41 B.C. that one of the more famous stories involving opal unravels,” writes Allan W Eckert in The World of Opals. There, he details a conflict between Mark Antony and a Roman senator named Nonius who is “in possession of a particularly fine opal - one of the finest ever reported.”

As the legend goes, Antony wanted to purchase the opal and present it as a gift to Cleopatra, the Queen of Egypt. Perhaps too attached to his prized opal, or unimpressed by Antony’s temporary reign of power, the wealthy senator refused to part with the gem. “Furious, the emperor retaliates by ordering the death of Nonius and confiscation of all his property,” writes Eckert. Perhaps getting wind of the plot from a friend on the inside, or tapping into the purported powers of “invisibility” of opals, Nonius escaped into exile with his envy inspiring gem and his life.

For a Roman noble to give up his citizenship in an era when the empire encompassed the entire Mediterranean, must have been no little feat. It’s a testament to the power and meaning of opal in ancient cultures, and a reminder of how lucky we are to have such easy access to the magical stone today.